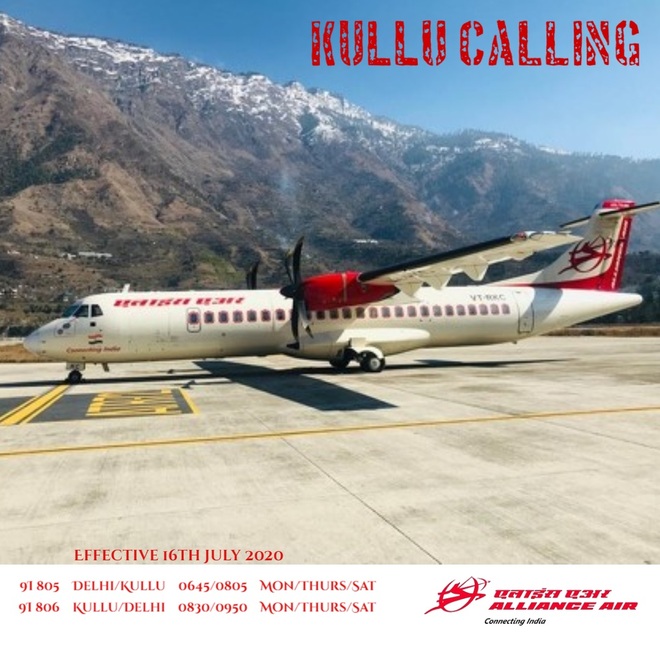 Air-India (AI) will resume flight between Delhi and Kullu from July 16. Kullu Air-India station manager Akhilesh Vijayi said the schedule had been released and online sale of tickets had started. The flight would operate on Mondays, Thursdays and Saturdays. The plane will leave Delhi at 6.45 am and reach Kullu at 8.05 am. It will start from Kullu at 8.30 am and arrive Delhi at 9.50 am.

Delhi-Kullu tickets are available for Rs 5,268 and Kullu-Delhi tickets are priced at Rs 15,138.

Akhilesh said the airline was adhering to all government guidelines and following the standard-operating procedures (SOPs) issued by the Ministry of Civil Aviation. The precautionary measures would be ensured in the aircraft.

The sole flight to Kullu had been halted on March 23 due to lockdown. The airlines planned to resume flights to Kullu and Dharamsala from Delhi from May 25, but it started for Dharamsala only. Pawan Hans resumed helicopter services between Kullu, Shimla and Chandigarh from June 22.

Now, when the government had allowed entry of tourists into Himachal, the airline has planned to restart its services.

Kullu DC Richa Verma said the tourists having all the documents would not be quarantined and sent to their destination directly. A nodal officer had been appointed at the Kullu airport to apprise tourists and residents of various guidelines to be followed to curtail the spread of Covid-19.

Kullu-Manali airport director Neeraj Kumar Srivastava said arrangements had been made at the airport according to the directions of the government.