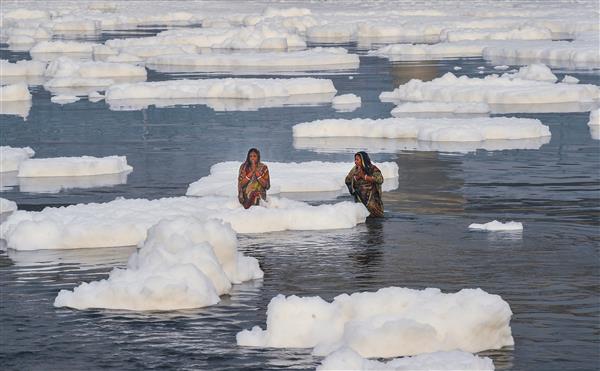 Women devotees perform rituals of Chhath Puja celebration, as toxic for floats on the surface of polluted Yamuna river at Kalindi Kunj, in New Delhi, on Sunday, November 7, 2021. PTI

Delhi Environment Minister and AAP leader Gopal Rai on Monday blamed the BJP-led Haryana government for the formation of toxic foam in the Yamuna river and said leaders of the saffron party here should seek answers from the neighbouring state.

Pictures and videos of devotees standing in waist-deep toxic froth in the Yamuna at Kalindi Kunj here went viral on Monday, with opposition BJP in Delhi blaming the Aam Aadmi Party (AAP) government for the “poisonous” water and air in the city.

Rai also said that Delhi Lieutenant (LG) Governor Anil Baijal had decided not to allow Chhath Puja on the banks of the river.

BJP leaders have been protesting against the city government over the ban by the Delhi Disaster Management Authority (DDMA) on Chhath celebrations on the river’s banks.

“I think the people of the BJP are frustrated… The LG took the DDMA decision (to not allow Chhath Puja on the Yamuna banks) and Haryana releases water in the river. The LG belongs to the BJP government (*at the Centre*) and the party is (also) in power in Haryana,” Rai said.

“I am unable to understand why BJP leaders are unable to talk to their own LG and government,” the minister told reporters here.

According to the decision taken by the DDMA, the city government has been making arrangements to conduct Chhath Puja at 1,000 designated places, Rai said.

“The BJP has nothing to do with Chhath celebrations and it never made arrangements for the festival earlier too,” he claimed.

Earlier, Tiwari had alleged that the AAP government did not allow Chhath Puja on the Yamuna banks because it wanted to cover up the frothing in the river due to high pollution load.

“(Delhi Chief Minister) Arvind Kejriwal has been saying since 2013 that his government will make the Yamuna fit for bathing in five years. Today, Delhi’s air and water both are poisonous. They did not allow Chhath celebrations on the Yamuna so that no one can see how poisonous the river has become,” he alleged. PTI