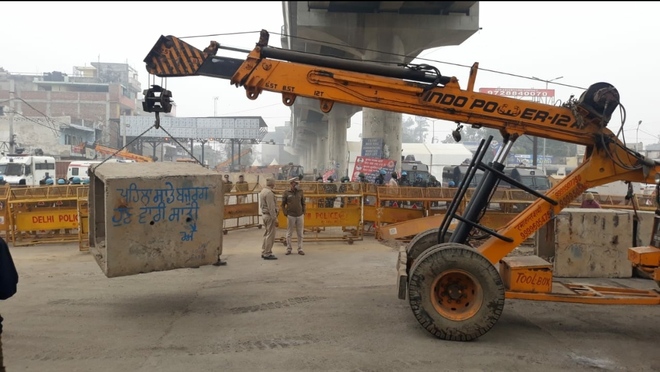 Boulders being removed from the Tikri border on Sunday.

Ahead of the tractor march, the Delhi Police today started removing boulders from the Delhi-Rohtak highway at the Tikri border.

The boulders were placed to stop the protesters from entering Delhi. Sand dumped on the highway has also been lifted, but two-layer barricading is yet to be removed.

Purushottam Singh Gill, a leader of the BKU (Lakhowal), said the Delhi Police had promised to clear the highway before the parade. The rally route had been finalised. He reiterated that the tractor march would be peaceful.

Meanwhile, several people from Punjab reached the border in buses, cars and tractor-trailers to join the parade.

Jhajjar SP Rajesh Duggal said besides the local police, 25 companies of paramilitary forces and the Indian Reserve Battalion (IRB) had been deployed at Tikri. — TNS