Cemented barriers and multi-layered barricades have also been put up at Ghazipur border, where many farmers have been protesting since Saturday 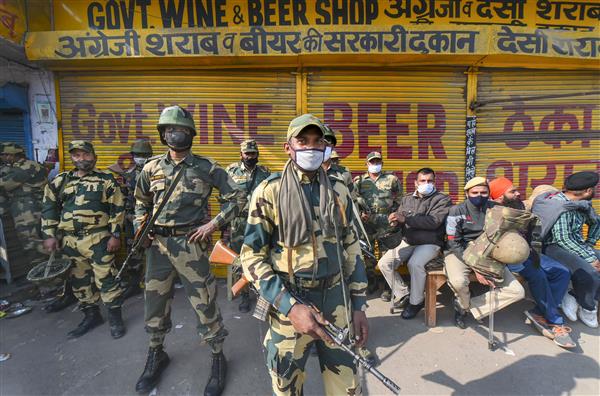 A day after the agitating farmers threatened to block all entry points to the national capital, the Delhi Police on Monday enhanced security deployment at all border points connecting the city with neighbouring states of Haryana and Uttar Pradesh.

Rejecting the Centre’s offer to hold talks once they move to the Burari ground, the farmers protesting against the new agricultural reform laws have been staying put at Tikri, Singhu and Ghazipur borders.

“Delhi Police has strengthened its presence at various border points in the wake of the farmers protest. All internal and outside forces have been mobilised to the maximum,” a senior police officer said.

“They (farmers) have been given an offer and the arrangements are better at the Burari instead on the road. On the road, there are issues for commuting. Here, there is no toilet or water, whereas the arrangements in Burari are better. The police have made good arrangements and we are ready for any situation,” he said.

Addressing a press conference at Singhu border on Monday, a representative of protesting farmers said they want Prime Minister Narendra Modi to listen to their “mann ki baat”.

“Our demands are non-negotiable,” he said and claimed that the ruling party “will have to pay a heavy price” if it did not heed to their concerns.

“We have come here to fight a decisive battle,” he added.

On the other hand, a small fraction of agitating farmers at Tikri border moved to Burari ground in north Delhi, the place allotted to them by the Centre to protest peacefully.

Another senior police officer from outer district of Delhi Police, who has been overseeing the security arrangements at the Tikri border, said the situation remained peaceful at the border and the protestors have not yet entered the national capital.

There is heavy security deployment with multi-layered barricades as a precautionary measure.

“The situation remains peaceful, but the protestors have refused to proceed to Burari ground. Multi-layered barricades are in place at the border. But the farmers are still at the border and have not entered Delhi. They said they will decide on their further course of action on December 3 as a delegation of the farmers has been invited for discussion,” the officer said.

Cemented barriers and multi-layered barricades have also been put up at Ghazipur border near UP gate where many farmers have been protesting since Saturday.

“The protestors do not wish to go to Burari ground and want to carry out their protest at Jantar Mantar. If not, they will not move from here and continue to protest at UP Gate,” a senior police officer from east district said.

The security deployment has also been enhanced on the Delhi-Gurgaon border in view of ‘Delhi Chalo’ march call given by various farmer groups.

As a preventative measure, the Delhi Police has also intensified checking of vehicles at the border points, leading to heavy traffic snarls.

Deputy Commissioner of Police (Southwest) Ingit Pratap Singh said: “We have not received any inputs on farmers coming here, but as a precautionary measure, we have deployed our forces.”

Union Home Minister Amit Shah had appealed to the farmers to shift to Burari ground and said the Centre was ready to hold discussions with them as soon as they moved to the designated place.

A meeting of over 30 farmer groups had on Sunday rejected Shah’s offer for talks before the scheduled date of December 3 and demanded an unconditional dialogue. PTI