This comes a day after the national capital registered 17,282 new infections, its highest single-day spike till date 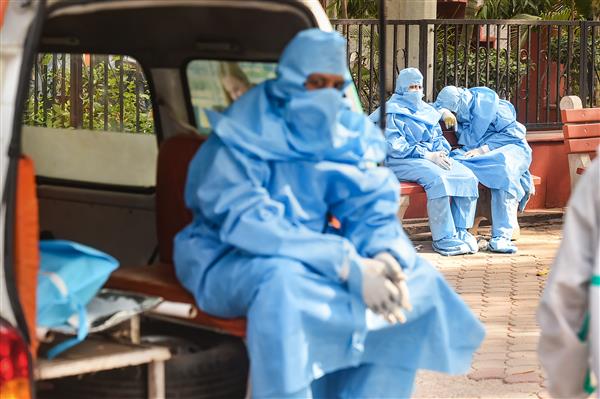 Family members, wearing PPE kits, wait during cremation of a COVID-19 victim, at the Nigambodh Ghat in New Delhi. PTI

Delhi recorded 16,699 fresh COVID-19 cases and 112 fatalities due to the disease on Thursday, according to data shared by the health department here.

This comes a day after the national capital registered 17,282 new infections, its highest single-day spike till date. The number of cases has been on an upward spiral in the last few days.

Also, the number of total tests conducted on Wednesday was 82,569, relatively less than the over 1.08 lakh tests done on Tuesday.

The positivity rate on Thursday mounted to 20.22 per cent, the highest till date in Delhi.

Battling the fourth wave of the coronavirus pandemic, Delhi has left financial capital Mumbai far behind in the daily tally of cases, becoming the worst-affected city in the country.

On Wednesday, the positivity rate was 15.92 per cent.

The number of cumulative cases on Thursday stood at 7,84,137. Over 7.18 lakh patients have recovered from the virus.

The number of people under home-isolation increased to 26,974 from 24,155 on Wednesday while the number of containment zones mounted to 8,661 from 7,598 a day before, the bulletin said. PTI