On Saturday, the city had recorded 60 fatalities and 414 new cases of Covid-19 with a positivity rate of 0.53 per cent 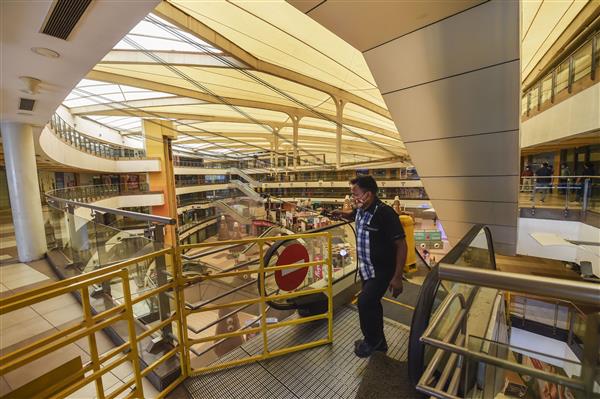 A worker sanitises at Vasant Square Mall prior to opening of markets and shopping malls after relaxation of lockdown, in New Delhi. PTI

The national capital reported 381 new instances of the Covid-19 infection, the lowest since March 15, with the positivity rate dipping to 0.5 per cent, according to health department data on Sunday.

Also, 34 more people have succumbed to the disease in a day, the lowest in around two months. These new fatalities pushed the death toll here to 24,591.

Chief Minister Arvind Kejriwal had on Saturday said the coronavirus situation in Delhi is quite under control.

“Bringing back the economy on track is crucial as the situation of coronavirus is improving,” he said.

Kejriwal had held two key meetings on Friday to discuss preparations for the anticipated third wave of the coronavirus pandemic. He held an important meeting with the expert committee and then with the preparation committee later.

Delhi has been reeling under a brutal second wave of the pandemic that is sweeping the country, claiming a massive number of lives daily with the recent oxygen supply shortage issue at various hospitals adding to the woes.

Since April 19, both daily cases and single-day death count had been spiralling up. On April 20, Delhi had reported 28,395 cases, the highest in the city since the beginning of the pandemic. On April 22 the case positivity rate was 36.2 per cent, the highest so far.

However, the number of cases has shown a downward trend of late. The positivity rate too has been shrinking in the last several days.

The national capital had recorded 623 cases and 62 deaths on Tuesday, 576 cases and 103 fatalities on Wednesday, and 487 cases and 45 deaths on Thursday.

A total of 76,857 tests, including 55,786 RT-PCR ones, were conducted a day ago, according to the health bulletin on Sunday.

The total number of cases reported in the city so far stood at 14,29,244 while Over 13.9 lakh patients have recovered from the virus.