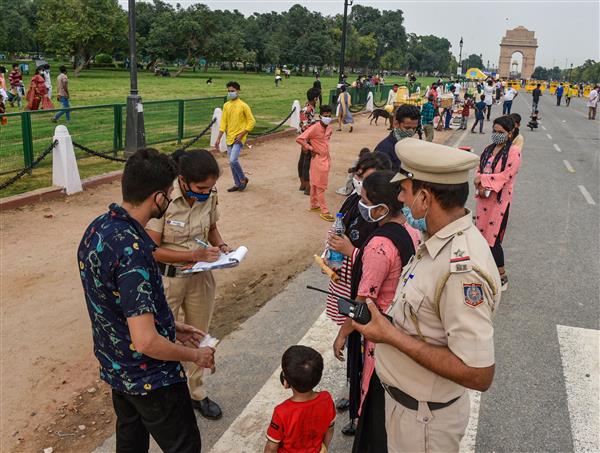 Policemen impose fine to visitors for not wearing masks near India Gate during Unlock 3.0 in New Delhi. (PTI Photo)

A total of 1,23,317 patients have recovered, migrated or been discharged while the number of active cases stood at 10,356, of which 5,663 patients are under home isolation.

Fifteen people succumbed to COVID-19 in the past 24 hours, taking the death toll to 4,004, the authorities said.

A total of 4,289 RT-PCR and 8,441 rapid antigen tests were conducted in the city in the last 24 hours, the authorities said.

The number of COVID tests conducted in the national capital on Saturday was less because of Eid al-Adha.

Over the past week, the number of new cases has grown by less than one per cent every day.

The recovery rate of COVID-19 patients has increased to over 89 per cent in Delhi. The positivity rate in the past 24 hours was 7.54 per cent, the authorities said.