At 68, the number of deaths was lowest since November 6, when the city recorded 64 fatalities 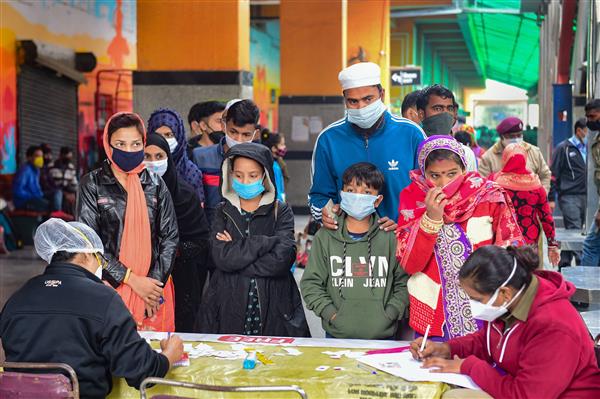 Passengers wait for their turn to get tested for COVID-19 at Nizamuddin Railway Station in New Delhi. PTI Photo

The national capital recorded 4,906 new COVID-19 cases on Sunday and a positivity rate of 7.64 per cent while 68 fatalities increased the death toll to 9,066, authorities said.

This is the second consecutive day that the number of deaths has remained below 5,000 and the positivity rate below eight per cent.

At 68, the number of deaths was lowest since November 6, when the city recorded 64 fatalities.

A total of 64,186 tests, including 29,839 RT-PCR ones and 34,347 rapid antigen tests, were conducted the previous day for the detection of COVID-19, according to a bulletin by the Delhi health department on Sunday.

As many as 131 COVID-related deaths were recorded on November 18, the highest to date.

According to the bulletin, the total number of coronavirus cases climbed to 5,66,648 on Sunday, of which 5,22,491 have recovered.