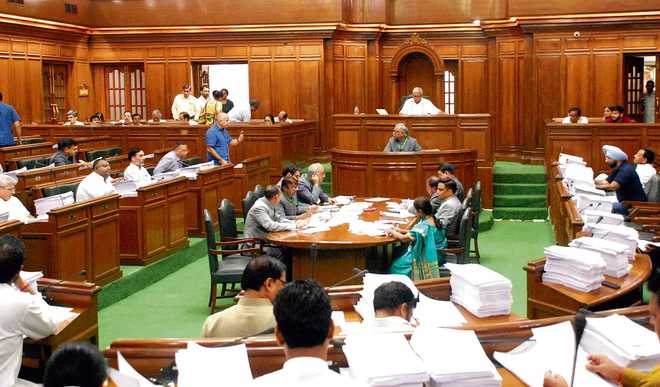 Photo for representational purpose only. Tribune/File

Despite the Delhi Assembly passing a bill to hike the salaries and allowances of MLAs by over 66 per cent, the lawmakers of the national capital will continue to draw lower salaries than their counterparts of Telangana, Himachal Pradesh and might still be among the lowest paid in the country.

The monthly salary of an MLA in Delhi was Rs 12,000 but after the bill, which will go for President's approval, it will be Rs 30,000 and along with allowances, it will go up to Rs 90,000 from Rs 54,000. Five different bills were tabled for the hike in salaries of ministers, MLAs, chief whip, Speaker and Deputy Speaker, and Leader of Opposition in the Assembly, which were passed by the members. These bills will now be sent for president's approval.

The salary of Kerala MLAs is lower than Delhi MLAs and is a meagre Rs 2,000 while they do not have a secretarial allowance whereas the constituency allowance stands at Rs 25,000, according to PRS.

The salaries of Telangana MLAs are Rs 20,000 but the constituency allowance stands at Rs 2.3 lakh whereas there are allowances also on accommodation if it is not provided by the government.

Chhatisgarh lawmakers get allowances like orderly allowance to the tune of Rs 15,000, medical allowance of Rs 10,000.

Thus, the cumulative salaries of Uttarakhand MLAs are over Rs 1.82 lakh while those of the AAP ruled Punjab is near Rs 95,000. The Mizoram MLAs draw close to Rs 1.50 lakh.

Delhi MLAs have raised the issue of low salary several times in the past with Vishesh Ravi even saying in 2018 that unmarried MLAs find it difficult to find brides. Chief Minister Arvind Kejriwal had said that their is an honest government and their MLAs do not indulge in corruption.

Salaries and allowances of Delhi MLAs were last increased in 2011.