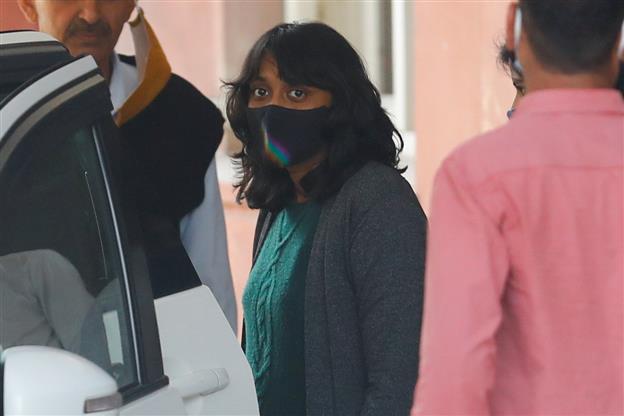 The central government was rapped by the Delhi High Court on Tuesday for not filing its response to a plea by climate activist Disha Ravi for restraining the police from leaking to the media any probe material in relation to the FIR lodged against her in the toolkit case, despite granting a last and final opportunity to it in March this year.

The strong remarks by the court came after it was told the Centre has not filed a response to Ravi's plea yet.

The court on March 17 had granted a final opportunity to the Centre to file its reply to the petition.

On Tuesday, it was inclined to impose costs on the Centre, but the court did not do so after central government standing counsel Ajay Digpaul said that due to COVID-19 officials were not coming to office and therefore, the response could not be filed.

The court, thereafter, gave the Centre six more weeks to file its reply and listed the matter for hearing in August.

Ravi was arrested by Delhi Police on February 13 for allegedly being involved in sharing on social media a "toolkit" related to the ongoing farmers' protest against the Centre's three controversial agriculture laws, and was granted bail by a trial court here on February 23.

The high court was hearing her plea to restrain police from leaking to the media any probe material in relation to the FIR lodged against her.

The petition has also sought to restrain the media from publishing the content or extract of any private chats, including those on WhatsApp, between her and third parties.

Ravi, in her plea, has said she is "severely aggrieved and prejudiced by the media trial surrounding her arrest and the ongoing investigation, where she is being viscerally attacked by the respondent 1 (police) and several media houses".

She has claimed that her arrest from Bengaluru on February 13 by a Cyber Cell team of Delhi Police was "wholly unlawfully and without basis".

She has also contended that in the present circumstances, it was "highly likely" that the general public will perceive the news items "as being conclusive as to the guilt of the petitioner (Ravi)".

She has claimed that the police first "leaked investigative material"—like alleged WhatsApp chats—the substance and details of which were only in the possession of the investigating agency.

The high court had on February 19 said certain media coverage of the investigation into the FIR against Ravi for her alleged involvement in sharing a toolkit backing farmers' protest indicates "sensationalism and prejudicial reporting", but declined to order the removal of any such content at this stage.

The issue of removal of content that was already in the public domain shall be considered at a later stage, it had said.

The high court, in an earlier order, had asked media houses to ensure that no leaked investigation material is broadcast as it could affect the probe and directed Delhi Police to abide by its stand on affidavit that it has not leaked nor intends to leak any probe details to the press.

The Ministry of Information and Broadcasting had said the petition was not maintainable as no complaint was first made to it for taking action against any TV channel or media house for any alleged incorrect reporting of the case. — PTI