The survey data showed that the highest number of symptomatic people were found in south west district followed by east Delhi, north west and west 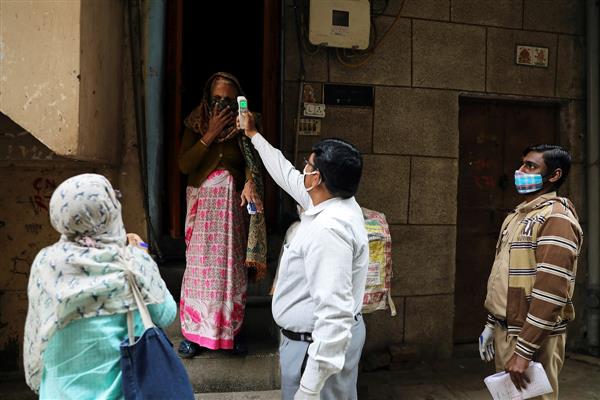 A health worker checks the temperature of a woman while conducting door-to-door survey to identify symptomatic people amid a spike in COVID-19 cases in New Delhi. REUTERS

A door-to-door survey conducted under the instruction of the Centre to identify and isolate COVID-19 infected people in Delhi’s containment zones and densely populated pockets threw up 1,178 positive cases with a positivity rate of 6.4 per cent, officials said.

The RT-PCR test reports of a total of 18,336 symptomatic cases and their contacts gave up 1,178 positive results, a Delhi government official said.

Delhi records over 2,300 COVID deaths in less than a month: Official data

“The number of positive cases found was lower than expected which means the positivity rate is going down but there could be other reasons for it that will require in-depth analysis of the survey results,” the official said.

Delhi recorded 5,246 fresh COVID-19 cases in a day as the positivity rate declined to 8.49 per cent, the lowest since October 28, while 99 more fatalities pushed the city’s death toll to 8,720 on Wednesday, authorities said.

It was after five days that the national capital recorded single-day death below 100.

The National Centre for Disease Control, in a report drafted recently, had warned that Delhi needed to be prepared for about 15,000 fresh cases of COVID-19 per day taking into account the winter season-related respiratory problems, a large influx of patients from outside and festive gatherings.

Under the survey, about 9,000 three-member teams equipped with oximeters and thermal scanners surveyed people in 4,456 containment zones and surrounding areas across 11 districts for five days beginning October 20.

The survey was part of various steps decided to be taken in Delhi in view of surging COVID-19 cases, in a high-level meeting attended by Union Home Minister Amit Shah and Delhi Chief Minister Arvind Kejriwal on November 15. PTI