On January 21, Delhi government had proposed the Delhi LG to withdraw weekend curfew and the odd-even system but the proposal was rejected 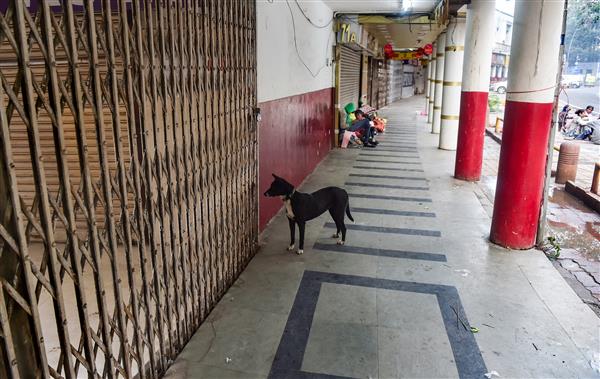 Shankar Market area wears a deserted look during the weekend curfew imposed by the Delhi government to curb the spread of Covid-19, in New Delhi. PTI

Weekend curfew and odd-even rule have hit the businessmen hard in the city with many of them struggling to meet break-even.

Some of the traders PTI spoke to contemplated mortgaging jewellery to meet the rising expenses or even cutting down on meals to save money.

Lalit, a grocery shop owner in Khari Bawli area of Old Delhi, said odd-even has impacted them specially as most of the customers would not know which days the shop would be open.

“There is no business at all. We are facing 100 per cent losses. Ours is a wholesale market and customers come here to buy in bulk. But they are keeping away due to the odd-even rule,” Lalit said.

“They would not know which shop is open on which day. More than the weekend curfew the odd-even rule for opening of shops has been responsible for losses.”

On January 21, the Delhi government had proposed the Delhi LG to withdraw weekend curfew and the odd-even system but the proposal was rejected.

“Curbs should be eased for us. Shopkeepers have bought winter stuff and with no customers now to buy them, where will they keep the stuff till next year? They don’t have money to afford rent for a godown.”

He said the situation has forced workers at these shops to return to their hometown.

“Most workers at these shops come from Uttar Pradesh and Bihar. They stay here on rent but with shops opening on odd-even basis, shopkeepers are forced to pay them for the number of days the shop opens, like say for 10 days.

“Many of them have left for their home since they were unable to make ends meet,” Randhawa said.

He said the government should at least allow those markets to open that have received the ‘fully vaccinated’ certificate from the district authorities.

Mohan Kapoor, a shopkeeper in Tilak Nagar market of West Delhi, rued the lack of business and said he has cut down on meals to save some money.

“I have stopped having lunch and eat only a single meal during the day. My wife and I ensure that our child eats three meals but we have cut down on our meals,” he said.

Kapoor said just when he had begun to recover from the losses from the two previous lockdowns, the current curbs brought him down.

A shopkeeper, who sells cosmetics items for women in Tilak Nagar, said he might be forced to mortgage his wife’s jewellery to pay bills.

“My shop is on rent. I have to pay EMI for my house I bought before the 2020 lockdown. All my savings were exhausted during the last two lockdowns,” he said.

“If the curbs are not eased soon, I might have to mortgage by wife’s jewellery to meet the expenses,” he added.

Delhi Health Minister Satyendar Jain has been saying that the hospitalisation rate has stagnated in the national capital, indicating that the current wave has reached a plateau.

The number of daily cases and the positivity rate has also shown a decline in the last few days. —