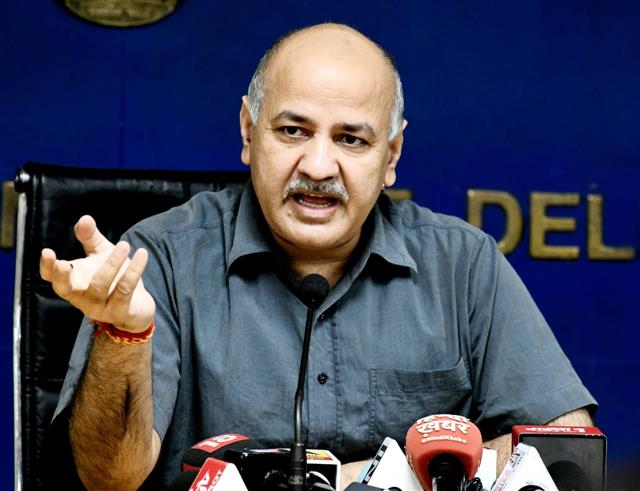 Delhi Deputy Chief Minister Manish Sisodia on Saturday said the families of six IAF, Delhi Police and civil defence personnel, who died in the line of duty, would get Rs 1 crore ex gratia each and asserted the city government stood shoulder-to-shoulder with the kin of these bravehearts.

Of the six men, three were from the Indian Air Force, two from the Delhi police and one from the city’s Civil Defence wing, he said.

Sisodia, while making the announcement during an online briefing, said the decision to honour these men and support their families was taken during a meeting on Saturday.

Chief Minister Arvind Kejriwal later, in a tweet in Hindi, said he saluted these bravehearts who made the supreme sacrifice while guarding the country against “external or internal threats”.

The Delhi government will give financial assistance of Rs 1 cr to each of the six families, he said, adding the country stands by them.

Kejriwal’s deputy said the Aam Aadmi Party government stands shoulder-to-shoulder with the families of these bravehearts who attained ‘martyrdom’ while serving the country.

“Although the loss of a soldier is irreparable, the Kejriwal government launched a scheme to provide ex gratia to families of such personnel so that it could become a means for them to live with dignity,” Sisodia said.

The Deputy Chief Minister later, in a tweet, shared a list of the six men in uniform who have died in the line of duty and also the decision to extend financial support to their families. The city government “salutes the martyrdom of these brave soldiers”, he wrote on Twitter.

“Many of these families are supporting themselves on pension. We cannot compensate for the precious lives lost but we hope this ex gratia will help them in living a more dignified life,” Sisodia said.

From the Delhi Police, a senior officer and a constable are among the six men who died while performing their duty.

Sanket Kaushik was an Assistant Commissioner of Police in Delhi. He was checking vehicles at Rajokri Flyover on July 25, 2020, when a truck hit him leading to his death on the spot.

Kaushik left behind his wife and three daughters who now depend on her for sustenance. “And, so to honour his martyrdom and support his family to live a life of dignity we have announced ex gratia of Rs 1 crore to his family,” Sisodia said.

Vikas Kumar, a Delhi Police constable, was on picket duty when the driver of a four-wheeler “knowingly increased the speed” and hit him when asked to stop the vehicle. He was injured in the incident and was shifted to AIIMS where he was declared dead on September 15, 2016.

Rajesh Kumar from Safdarjung a “martyr who lost his life while serving the Indian Air Force”. His aircraft took off from Jorhat in Assam and later it went missing. The wreckage was found in Arunachal Pradesh and Kumar was found dead on June 3, 2019.

He had married just three months ago. His family will be extended the assistance of Rs 1 cr, the deputy chief minister said in the briefing.

Flight Lieutenant Sunit Mohanty, from Dwarka in Delhi, was on the same flight as Rajesh Kumar. He also died in the plane crash on June 3, 2019. He was living with his family, including his aged father, mother and a younger sister, the government said.

Meet Kumar, a squadron leader in the Indian Air Force died on July 18, 2018, after his MIG-21 crashed in an operational flying sortie in the Kangra hills of Himachal Pradesh.

“We cannot compensate for his family’s loss but we can pay our respect for his martyrdom. So, we have announced ex gratia of Rs 1 crore to support his family as well,” Sisodia said.

Pravesh Kumar, a Civil Defence personnel was on duty at Mangolpuri flyover on September 19, 2020, when a truck rammed into him and fled. His family will also receive the support of Rs 1 cr, the deputy chief minister added. PTI