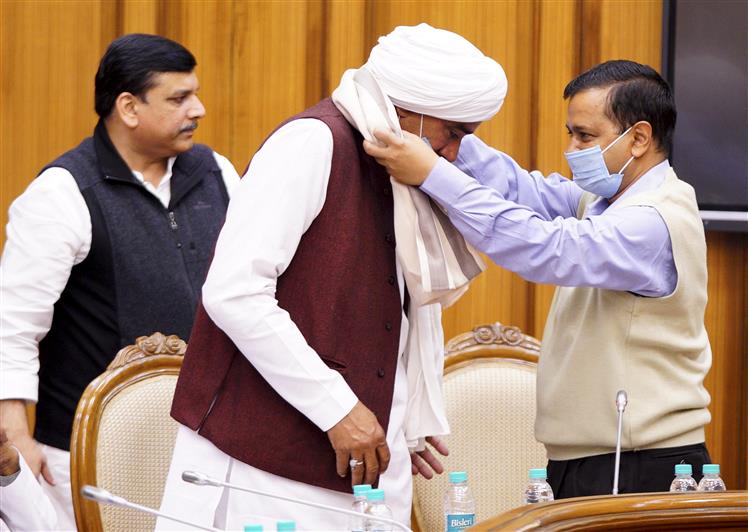 Delhi Chief Minister Arvind Kejriwal during a meeting with UP farmer representatives, regarding the three agri laws, in New Delhi, on Sunday, February 21, 2021. PTI

Delhi Chief Minister Arvind Kejriwal, in a meeting with farmer leaders, on Sunday said the three farm laws are a “death warrant” to the farmers.

Kejriwal had invited farmer leaders from Western Uttar Pradesh for lunch at the Delhi Assembly.

“The three anti-farmer laws are death warrant to the farmers. If these laws are implemented then the agriculture of India will go into the hands of some industrialists and the farmers will be devastated,” the CM said.

He added that if these laws are implemented, the farmers of India will become labourers in their own land.

He also demanded that the central government immediately withdraw all the three “black laws” and the legal guarantee of MSP be granted to all the 23 crops following the recommendations of the Swaminathan Commission.

The meeting was attended by over 40 farmer leaders from western UP.

Talking to the media, farmer leader Rohit Jakhar of Rashtriya Jat Mahasangh said that while the UP government cut electricity and water supply at the Ghazipur protest site, Kejriwal”s government supported farmers” protest by providing them water and toilets.

“Our support will go to those who will talk about our problems. The BJP government has hurt our self respect, we will give our reply through our votes,” Jakhar said. PTI