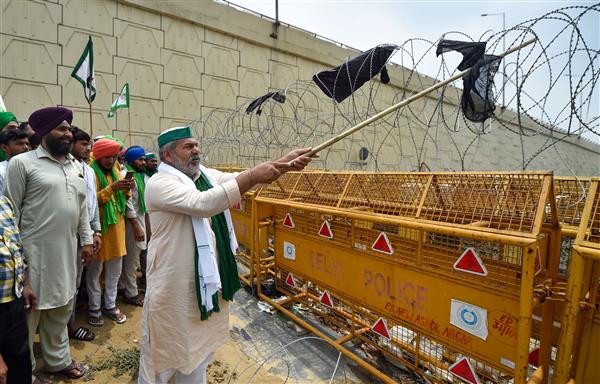 BKU leader Rakesh Tikait and farmers during a protest at Ghazipur border near New Delhi. PTI

The Samyukt Kisan Morcha (SKM) is all set to launch its Parliament protest from tomorrow morning.

It has finalised a list of 200 farmers who will leave for Parliament from the kisan andolan office at Kundli tomorrow. The protesting farmers will organise a parallel parliament at Jantar Mantar in New Delhi and discuss agricultural laws there. SKM leader Balbir Singh Rajewal said all preparations for the protest had been completed and the list of dos and don’ts finalised. “We have decided to run a ‘kisan sansad’ at Jantar Mantar,” he said.

Two hundred selected farmers would reach kisan andolan office daily and then move to Parliament at 9 am carrying identity cards. They would be led by the leaders named by the SKM, said Harinder Singh Lakhowal, general secretary, BKU (Lakhowal).

Krantikari Kisan Union chief Darshan Pal said five buses had been hired for carrying farmers to Parliament daily. Farmer leaders Balbir Singh Rajewal, Yogendra Yadav, Ruldu Singh Mansa, Shiv Kumar “Kakka”, Manjeet Rai and Kuldeep Singh would go with the farmers on the first day, he added. The farmers would select their speaker and deputy speaker there and hold “kisan sansad” session at 11 am to 5 pm, he added. “Our protest will be peaceful as no farmer or leader wants to spoil the farmers’ movement that has been continuing peacefully for the past eight months,” said Balwinder Singh of Gurdaspur.