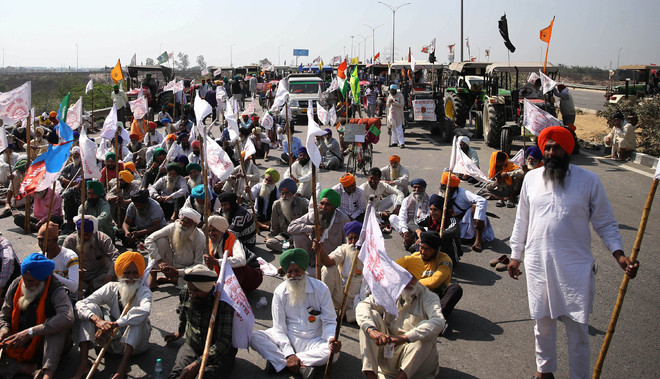 The Haryana Government has decided to strengthen eight alternative routes for general traffic from Sonepat to Delhi in view of the ongoing protests by farmers at the Haryana-Delhi borders.

Sources said the decision had been taken in the light of problems highlighted by industrialists at a meeting of the government-constituted committee to begin a dialogue with the farmers on clearing the blockade.

The internal roads in the HSIIDC area in Kundli would be strengthened, while another road from Sonepat going up to Saifabad (Delhi border) would also be strengthened to minimise inconvenience being faced by the commuters

According to information available, the internal roads in the HSIIDC area in Kundli would be strengthened, while another road from Sonepat going up to Saifabad (Delhi border) would also be strengthened to minimise inconvenience being faced by the commuters.

Industrialists from Kundli, Rai and Nathupur, who met the committee, said the committee and the district administration seemed very receptive to their suggestions and gave them a patient hearing.

They said routes like the Nathupur-Saboli road and the GT road up to Janti Khurd would help ease commuting once these were strengthened. Sources said the district administration had identified these routes and was in the process of preparing such a proposal which would be put up for government approval.

Meanwhile, the state government has conveyed to the Centre that the farmers chose to stay away from the meeting with the high-powered committee constituted to begin a dialogue.

“The ACS (Home) and the DGP today met the Home Secretary and told him that the farmers did not show up for the meeting. By constituting a committee and inviting the farmer leaders for talks, the government is going all out. We can only make efforts. We will proceed further on the basis of directions by the Supreme Court,” Vij stated.

The farmers, meanwhile, have said that there are no directions to them from court on the road blockade. “The road has been blocked by the Delhi government. We are not party in the case. The Haryana government should approach the Delhi government and clear the barricades,” farmer leader Balbir Singh Rajewal said.

Haryana BKU (Chaduni) leader Gurnam Singh Chaduni said, “We are not interested in camping at the border. Let the Delhi government open the borders and we will move into the national capital. Their roads will be clear. In any case, traffic continues to flow.”

After the farmers did not arrive for the meeting, the government-constituted committee met industrialists who highlighted their problems and sought solutions.