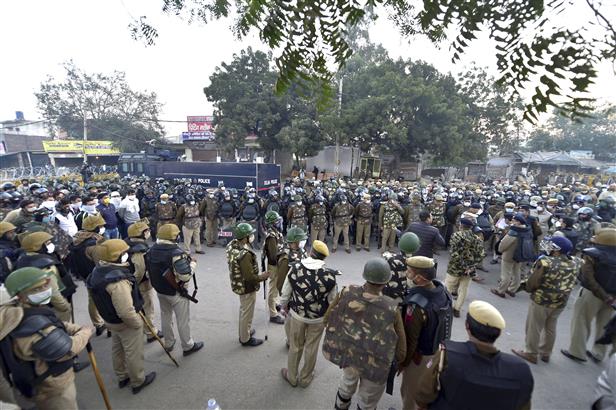 Delhi police deployed in large numbers to stop farmers coming to Delhi during their Delhi Chalo protest against Kisan Bill, at Singhu border, in New Delhi on Friday. PTI Photo

The Delhi Police have sought permission from the AAP government to use the city’s nine stadiums as temporary jails due to the farmers’ ‘Delhi Chalo’ march, government sources said on Friday.

“In view of the farmers’ march, the Delhi police have asked the Delhi government for permission to use nine stadiums as temporary jails to keep the detained or arrested farmers,” a source said.

On Friday morning, the Delhi Police used tear gas at the Singhu Border to disperse protesting farmers who are heading towards the national capital as part of the march to protest the Centre’s new farm laws.

There is a heavy police deployment of security personnel with sand-laden trucks and water cannons stationed, usage of barbed wire for fencing at the Singhu Border to prevent the protesters from entering the city.

Police said they would not allow the agitating farmers to enter Delhi. PTI