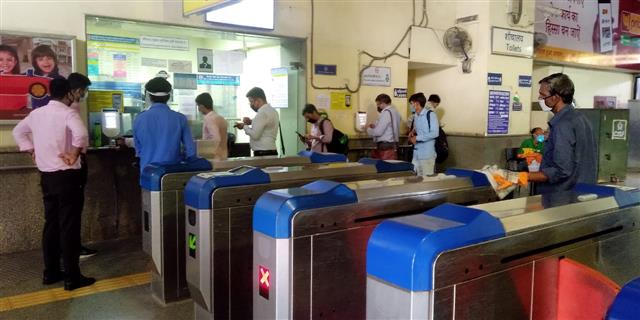 The Delhi Metro on Friday announced the closure of exit and entry gates at six metro stations on the Green Line in view of the ‘Delhi Chalo’ march by farmers against the Centre’s new farm laws.

The Delhi Metro authorities had earlier announced that services from neighbouring cities will remain suspended on Friday.

The Delhi police on Friday used tear gas shells to disperse a group of farmers who had reached the Singhu border as part of the protest march. The shells were fired at the border point which connects Delhi with Haryana.

Security has been strengthened at the border and sand-laden trucks and water cannons have been stationed. Barbed wire is also being used for fencing at the Singhu border to prevent the protesters from entering the city.

Punjab farmers, representing over 30 farm bodies, have announced they will go to Delhi through several routes — Lalru, Shambhu, Patiala-Pehowa, Patran-Khanauri, Moonak-Tohana, Ratia-Fatehabad and Talwandi-Sirsa. Tension was escalating at all border points.

Farmers have assembled near the borders in tractor-trolleys laden with rations and essentials for their proposed Delhi march.

Authorities in Haryana have imposed prohibitory orders under Section 144 of the Criminal Procedure Code (CrPC) in several parts of the state to prevent assembly of the protesters.

The Farmers’ bodies have said they would hold a dharna wherever they are stopped from moving towards the national capital to demand the repeal of the new farm laws, which, they said, should be replaced with another set of legislations framed after wider consultation with the stakeholders. PTI