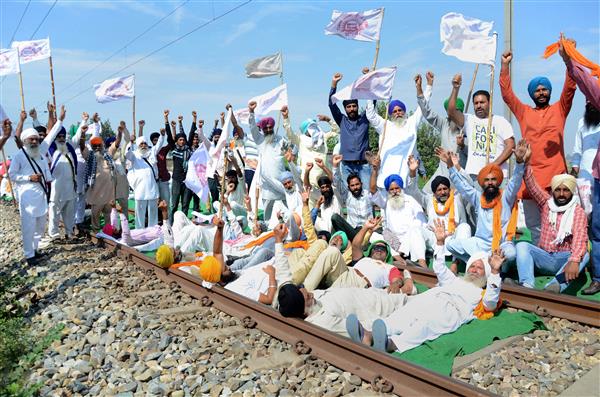 The Delhi Police on Monday said there were no reports of any disturbance in the national capital due to Samyukt Kisan Morcha’s six-hour ‘rail roko’ protest to demand the dismissal and arrest of Union Minister Ajay Mishra in connection with the Lakhimpur Kheri incident.

Deputy Commissioner of Police (Railways) Harendra Kumar Singh said, “We have not received any report of disturbance in Delhi.”

The stir affected 150 locations in the Northern Railway zone and hindered the running of 60 trains causing inconvenience to passengers who could be seen waiting for long hours with their baggage.

In the NWR zone, rail traffic was affected in some sections in Rajasthan and Haryana with 18 trains cancelled, 10 partially cancelled and one diverted due to the protest.

The SKM, an umbrella body of farmer unions spearheading the agitation against the Centre’s Agri laws, has demanded MoS Home Ajay Mishra’s dismissal and arrest over the Lakhimpur Kheri massacre.

Four of the eight people who died in the violence on October 3 were farmers, allegedly knocked down by a vehicle carrying BJP workers. Angry farmers then allegedly lynched some people in the vehicles. The other dead included two BJP workers and their driver.

Farmers have claimed that Ajay Mishra’s son Ashish was in one of the vehicles, an allegation denied by him and his father who say they can produce evidence to prove he was at an event at that time. Ashish Mishra was arrested in the case on October 9. —PTI