Fight against COVID not Centre vs State issue, we should not politicise it: Jain 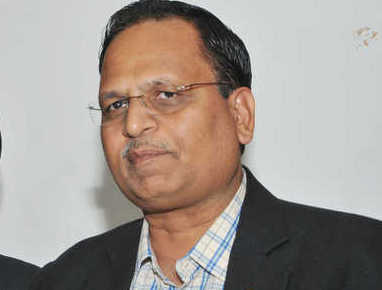 The fight against coronavirus is not a Centre versus state issue, and it should not be politicised, Delhi Health Minister Satyendar Jain Thursday, a day after the Union government flagged below-par inoculation of eligible beneficiaries here and in some other states.

The Centre had Wednesday written to Delhi, Maharashtra and Punjab rejecting as baseless allegations of shortage of the injection by Maharashtra and some other non-BJP ruled states.

Interacting with reporters here, Jain said the vaccination drive is going well in the city.

"I would say our common fight is against the coronavirus pandemic, and it is not a state vs Centre thing. So, we should not politicise the issue, and fight it together," he added.

Union Health Minister Harsh Vardhan had Wednesday alleged some states were trying to cover their "failures" by demanding vaccination for all without first inoculating enough of the eligible beneficiaries.

As India registered a record single-day spike of over 1.26 lakh COVID-19 cases, Jain said, "Yesterday, India reported over 1,25,000 cases, as opposed to the earlier peaks in which the highest count was lodged at 99,000. This means that this peak is more infectious, and the number of cases is higher than the previous ones."

He said the Kejriwal government has also appealed to the Centre to allow it to set up vaccination camps in communities for a mass inoculation drive.

The death toll due to the disease in the country increased to 1,66,862, with 685 new fatalities being reported in a day, according to the data updated in the morning.

Registering a steady increase for the 29th day in row, the count of active cases has gone up to 9,10,319, which is 7.04 per cent of the total infections, while the country's recovery rate has dropped to 91.67 per cent, it stated.

Delhi reported 5,506 positive cases on Wednesday and the positivity rate was above 6 per cent, and 90,000 covid tests were conducted, he added.

"This time, the coronavirus is spreading exponentially but the severity of the virus is less, and so are the fatalities. Also, younger population is getting more infected," Jain added.

Jain said that the Kejriwal government has made two more requests to the Centre: vaccination should be allowed for everyone, at least adults; and to allow setting up of vaccination camps in community areas, unlike the existing model of jabs being given at  healthcare facilities only.

On a question on the number of healthcare workers being inoculated here, he said that suggestions are being made about "lower number" in that category of beneficiaries, but, the "number is low at Centre-run facilities, and higher at Delhi government hospitals".

Meanwhile, authorities in North West District on Wednesday issued an order, asking to do "RT-PCR/RAT tests on all persons visiting the dispensaries for their ailments or vaccination with immediate effect". — PTI