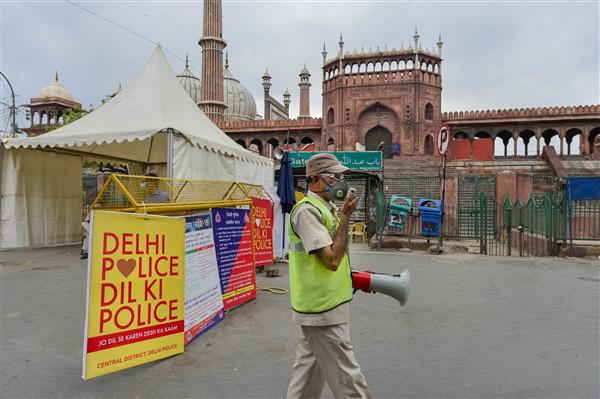 A policeman makes announcement about restrictions outside the Jama Masjid during ongoing COVID-19 lockdown in old Delhi. — PTI

The Delhi High Court Thursday allowed 50 people to offer namaz five times a day at Nizamuddin Markaz during Ramzan, saying there is no direction in the Delhi Disaster Management Authority (DDMA) notification to close down places of worship.

The court also noted that there was "no clear stand" of the central government as to whether religious congregations or gatherings were permitted in other places of worship.

Justice Mukta Gupta directed that namaz is to be offered on "the first floor above the basement" of the mosque, making clear that it has to be "strictly in accordance" with the DDMA's April 10 notification and other standard operating protocols.

"Considering the fact that religious places/places of worship are not closed by the DDMA notification, this court finds that the petitioner (Delhi Waqf Board) has made out a prima facie case for permitting devotees to offer namaz at Masjid Bangley Wali," the court said.

It directed the Station House Officer of Nizamuddin police station to permit entry of 50 people five times a day to offer namaz only on the first floor of the Masjid Bangley Wali.

"Considering the fact that devotees require performing namaz five times a day during the holy month of Ramzan and at the same time care has to be taken that COVID-19, which is increasing exponentially in Delhi, does not spread and does not affect the health of the public at large and those who will visit the mosque to offer namaz, the SHO is directed to permit 50 persons five times a day to offer namaz on the first floor of the masjid," the court said, adding that social distance has to be maintained.

The court declined to increase the number of people or allow use of other floors of the mosque for offering prayers as sought by senior advocate Ramesh Gupta on behalf of the Delhi Waqf Board, saying "day-by-day situation is getting worse in Delhi".

"Please wake up to the grim situation in Delhi," the court said.

However, on repeated requests by the senior lawyer that social distancing can be maintained on the other floors of the mosque, the court permitted the Board to move an application before the SHO to use other floors.

It also said that its order would be subject to any notification issued by the DDMA in view of the increasing number of COVID-19 cases in the National Capital, which recorded the biggest single-day jump of 17,282 COVID-19 cases.

With these directions, the court listed on July 15, the Board's plea seeking opening of the Nizamuddin Markaz where the Tablighi Jamaat congregation was held amid the COVID-19 pandemic and was locked since March 31 last year.

Earlier in the day, in a status report filed by the Assistant Commissioner of Police Sub Division Lajpat Nagar, the central government said the court "in its wisdom and discretion" may permit such persons as it deems fit and proper to perform namaz only on the ground floor of the mosque at the Nizamuddin Markaz by strictly following all COVID-19 related protocols.

Without specifying whether all places of worship were closed, as was sought by the high court, the report said the DDMA notification prohibiting all kinds of gathering in the wake of increasing COVID-19 cases was applicable to all religions.

Justice Mukta Gupta, after perusing the report, observed that it was silent on whether all the places of worship in the national capital were closed in accordance with the DDMA notification.

Justice Gupta said her directions on April 13 were very clear that the court wants to know whether all places of worship were closed as per the DDMA notification.

In the hearing during the second half of the day, advocate Rajat Nair, appearing for the Centre, told the court that Sacred Heart Cathedral was holding online mass on Sunday and at the Kalkaji Temple, the 'aarti' was being done online and only 'darshan' was being permitted.

"We are trying to control the aberrations wherever they are happening," he said, adding that any congregation in the present situation could have a disastrous effect.

The court had directed the Centre to file an affidavit indicating  as to how the DDMA order was being followed and whether any kind of social, religious, political or festive congregation or gathering was being permitted.

The court had called for the affidavit after Solicitor General Tushar Mehta on April 13 said that no gathering can be permitted at the mosque for offering prayers during Ramzan in view of the DDMA order.

He had also said that only the five persons who were already permitted to pray there each day could be allowed inside the Nizamuddin Markaz mosque.

The board, in its plea filed through advocate Wajeeh Shafiq, has contended that even after unlock-1 guidelines permitted religious places outside containment zones to be opened, the markaz—comprising the Masjid Bangley Wali, Madarsa Kashif-ul-uloom and attached hostel—continues to be locked up.

It has further contended that even if the premises was part of any criminal investigation or trial, keeping it "under lock as an out of bound area" was a "primitive method" of enquiry process.

Several FIRs have been registered under the Epidemic Diseases Act, the Disaster Management Act, Foreigners Act and various provisions of the penal code in connection with the Tablighi Jamaat event held at the markaz and the subsequent stay of foreigners there during the COVID-19 lockdown last year. — PTI