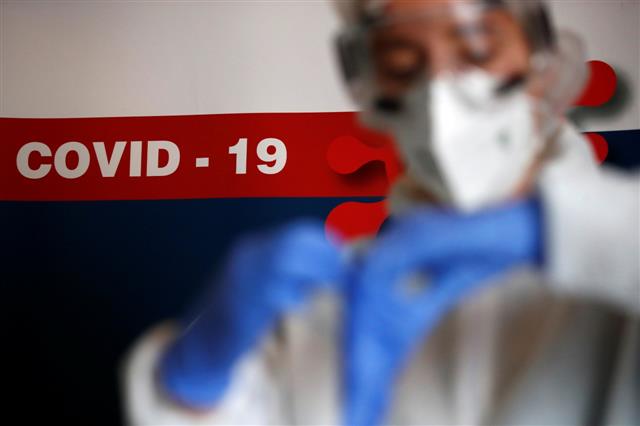 A senior doctor in the Delhi government, who did not wish to be named, added that it is not that RAT is completely unreliable. — Reuters

A high number of unreliable rapid antigen tests being conducted in Delhi may be masking a mountain of COVID-19 cases at a time when a "dangerous cocktail" of pollution, crowding during the festive season and devil-may-care attitudes is leading to record spikes in the daily incidence of the infection in the city, experts said.

At the same time, the scaling up of the gold-standard RT-PCR tests and loosening the testing regimen has also significantly helped in diagnosing a large number of infections which would otherwise have gone untraced, the experts said.

Bucking the national trend, the national capital has registered a massive surge in COVID-19 cases over the past few days with 5,891 fresh incidences recorded on Friday, the highest single-day spike till date, even as the positivity rate shot up to nearly 10 per cent.

Friday was the third consecutive day when over 5,000 cases were reported in a day in the city, with infection tally going beyond 3.8 lakh. In contrast, the national number of positive cases has been coming down every day—from a high of more than 90,000 at one time to 48,268 on Saturday.

"Is the situation normal? If RT-PCR tests are further ramped up, the numbers will be far more scary than the (about) 6,000 we are seeing today. I understand, people are mentally fatigued, especially the younger population, sitting at home and wanting to go out and socialise. But instead of being more responsible citizens, they have thrown all caution and precaution to the wind,” said Dr. Richa Sareen, pulmonology and critical care consultant at Fortis Hospital, Vasant Kunj.

The numbers tell only part of the story. The bigger issue is that authorities may not even be aware of a large number of positive cases that would have slipped through the cracks because they took the rapid antigen test (RAT), notorious for producing a large percentage of false negatives — meaning many positive patients with no or little symptoms are being declared negative, and therefore safe.  Noted lung surgeon Arvind Kumar said the sensitivity of RAT is "only about 50 per cent", meaning it "misses the other half”.

“And the danger of rapid antigen tests… is that an asymptomatic carrier of the infection, if found negative, will get a false sense of security, and go around in public infecting people. Had that person not got tested and feared being positive, and stayed at home, chances of him or her spreading infection would be far less," he told PTI.

Kumar, who works at the  Sir Ganga Ram Hospital, said such persons, who are infected but have wrongly tested negative, are "lulled into a comfort zone" and end up increasing the overall case burden.

The lung surgeon attributed the sudden spike in cases majorly to pollution, overcrowding in public places during festive season and the reckless attitude of many people towards observing safety norms in markets, restaurants and other places.

The Delhi government has significantly ramped up its testing from a daily average of over 18,000 in August to nearly 56,000 in October. Of these, RT-PCR tests account for about 28 per cent of the total.

The overall positivity rate combining the two methods is currently about 10 per cent.

"Pollution, festive season, and laxity in adhering to safety measures by people, especially the youth, is a scary combination and the easing of the economy has lulled them into a false sense of security. People should be panicking right now and staying indoors as much as possible, not holding birthday parties and posting pictures on social media with not a trace of a mask in sight,” Suranjit Chatterjee, a senior consultant at Apollo Hospitals, told PTI.

He termed the three factors a "dangerous cocktail" and warned that if people do not take things seriously, the virus will "wreak havoc". If they do not panic now, in a cautious way, they will end up panicking when hospital beds start getting swamped, he warned.

Chatterjee praised the government for scaling up tests and making the testing regimen more accessible and liberal. But, he said, the city would have seen 4,000 or 5,000 cases a day much earlier had RT-PCR tests been ramped up or if its percentage in the total number of tests was increased.

"So we may have missed a large number of positive cases due to RAT,” he said.  Delhi recorded 4,473 cases on September 16, which experts call the "second major spike" after the June 23 peak of 3,947. Delhi Health Minister Satyendar Jain has said the city may be experiencing a third wave now, but it is too soon to declare it such until more trends are available.

"RT-PCR tests should be done on family members of a positive case and close contacts who are symptomatic. I would not advise RAT in such a situation. However, if there is an industrial factory or a corporate office, where a large number of employees are there who are all feeling healthy, and the employer may just want to do it for sake of satisfaction, then RAT is fine”, said Chatterjee.

While RT-PCR is the "gold standard”, he can understand why it's not being done more widely.

"RT-PCR tests need a lot of manpower, resources and are costly too. So, government has to spend on multiple paraphernalia, like beds and ventilators and balance its budget accordingly.”

A senior doctor in the Delhi government, who did not wish to be named, added that it is not that RAT is completely unreliable.

“Results also depend on whether the sample has been collected properly or not. In RAT, swab is taken from throat, while in RT-PCR it is done from the nose, and in RT-PCR too, a proper jab has to made.

"Beside, testing regimen has been made so easy, and one does not even need a doctor's prescription to get tested in Delhi. Many people came out and got tested. Had the process been tedious, they would have tried to avoid it," he added.

Discussing the sudden spike in cases, Sareen, the Fortis consultant, said people walking around with scant or no regard to safety norms are "making things worse”.

Later, when beds won't be available, the same people will accuse the government or hospital authorities of inadequate COVID-19 care, she said.

"Resources can't be produced overnight. Even if we managed beds, ICU paraphernalia, we would need trained manpower, more housekeeping staff and more nurses and doctors. We saw what happened in the US, with ships and parks turning into hospitals, once the cases got out of hand," she said.

Sareen appealed to the youth to not take things casually, and not post pictures of parties on social media, creating a "false sense of normalcy”.

"I am sure, many people in Delhi must have already planned Halloween parties today. We have gone from state of fear to state of disregard," the doctor said. PTI