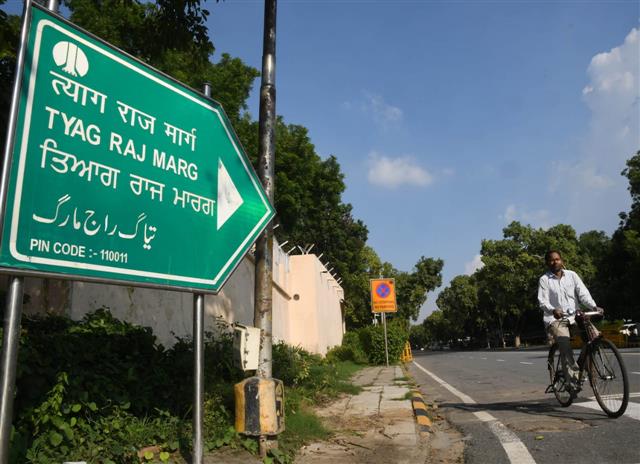 A view of the Tyag Raj Marg  sign board in New Delhi on Tuesday. Tribune Photo: Mukesh Aggarwal

Outgoing Vice President and Rajya Sabha Chairman M Venkaiah Naidu has promised to correct the particulars of his newly allotted residence--1, Tyag Raj Marg--following appeals by the Congress that the name of the legendary Carnatic musician is wrongly spelt in the Lutyens zone bungalow.

The issue was flagged by Congress chief whip in Rajya Sabha Jairam Ramesh who revealed the distortion saying to Naidu, “Sir, you are now moving to 1, Tyag Raj Marg. I want to make a special request. You have been a champion of Indian languages.  Who is this Tyag Raj? In Tamil, he is Thyagaraja.  In Telugu, he is Tyagaraja. Why is he made Tyag Raj in Delhi? This is what ‘Hindi imperialism’ does. This is what ‘Hindi zealotry’ does.”

Jairam added that when Naidu goes to occupy his new residence, he will find that the address is spelt as Tyag Raj in two separate words.

“Sir nobody in ‘Raj’ does any ‘Tyag’, It is ‘Tyagaraja’. So, I hope, you will ensure that the name of the house that you will occupy for the next innings of your life will be Tyagaraja Marg’ and not ‘Tyagraj Marg’,” the Congress veteran said bidding farewell to Naidu who was quick to pledge that he would make amends.

Noting that he had heard of the distortion in the spellings of 1 Tyag Raj Marg having existed for long, Naidu said “Definitely, I will change it. Don’t worry. ‘Tyagaraja’ is a great musician. People in Tamil Nadu, in Telugu and in Karnataka love his music, and he is a great man.”