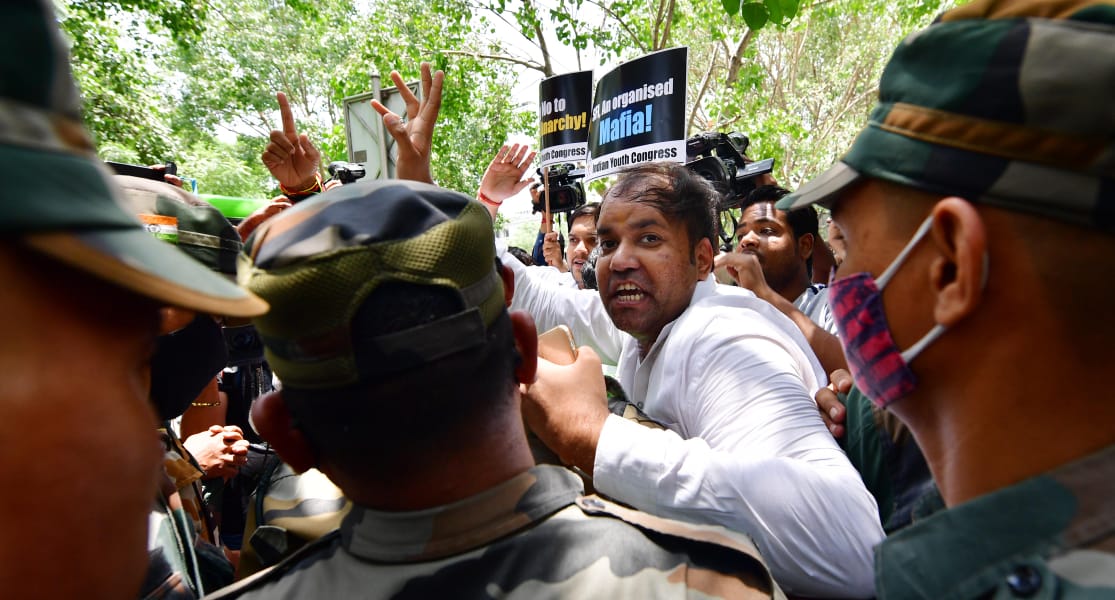 Security personnel stop members of the Indian Youth Congress during a protest outside the CPI(M) headquarters in New Delhi on June 25, 2022. Tribune Photo: Mukesh Aggarwal

A day after Congress MP Rahul Gandhi’s office in Kerala’s Wayanad was attacked allegedly by SFI members, Indian Youth Congress (IYC) workers staged a protest in Delhi demanding the arrest of those involved in vandalism.

The protest was held outside the CPI(M) office near Gol Market. They held placards that read ‘Arrest SFI goons’, ‘Say No to Left’s Anarchy!’ and raised slogans in favour of Rahul Gandhi.

A protest march of the SFI against Rahul Gandhi’s office in Wayanad on Friday turned violent as a group of activists allegedly entered his office and vandalised it, prompting Kerala Chief Minister Pinarayi Vijayan to strongly condemn the incident and warn of stern action against the culprits.

The student organisation protested, alleging that Gandhi failed to intervene in the issue of creating buffer zones around forests in the hilly areas of Kerala.

“We condemn this barbaric attack. In a state like Kerala, there have been instances of killings and attacks on IYC members by the Communist Party. The way SFI members attacked and vandalised Rahul Gandhi’s office in Wayanad yesterday cannot be tolerated,” said Rahul Rao, the national chairman, media department of IYC.

He said if the SFI and the LDF government in Kerala do not apologise for the attack, the IYC will “ensure that the gates of the SFI and CPI (M) offices are locked”.

“All those involved in the attack can be clearly identified. They should be arrested and punished,” Rao said while referring to a purported video of the attack.