Jahangirpuri violence: Delhi Police gets pics of accused clicked to match them with CCTV footage : The Tribune India 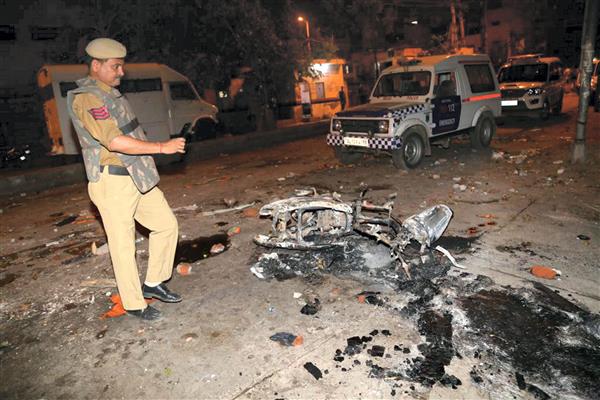 A policeman clicks pictures of a burnt-down scooter after violent clashes broke out during a Hanuman Jayanti procession at Jahangir Puri, in New Delhi, on Saturday, April 16, 2022. PTI

The Delhi Police took those arrested in the Jahangiripuri violence case to the Forensic Science Laboratory (FSL) where their photographs were clicked in the same angle as seen in the CCTV footage and videos, officials said on Thursday.

The entire exercise was done after securing the permission of the court, they said. The police said facial recognition system was used to nab many of the accused.

Earlier, 37 people have been arrested and two juveniles were apprehended. The police said some of the accused were nabbed with the help of facial recognition system which is being used by the Delhi Police to solve sensitive cases.

A senior police officer said they have already filed charge sheet against 37 accused in the violence.

“The initial investigation was conducted through local intelligence. Locals have also helped in the identification of the accused persons. To make it technically very strong evidence, we got the order from the court and got pictures clicked through the FSL. The photographs will be matched with the available videos.

“We took the accused from jail to the FSL unit and got them photographed in the same pose in which they were seen in the videos. The FSL is an expert unit at this. The report is yet to come,” the officer said.

Officials said this procedure has been used in the past as well.

The Delhi Police on July 14 filed a charge sheet against 45 people in the case related to Jahangirpuri violence before a court here under various charges including criminal conspiracy and Arms Act.

The prosecution said 20 out of 37 accused persons were arrested after being captured in CCTV footage/viral videos, and the help of technology has been taken for the identification of accused persons.

“We had issued non-bailable warrant (NBW) against eight people. Out of the eight, two accused have been arrested after the charge sheet was submitted on July 14. A total of 39 people have been arrested so far and two juvenile have been apprehended in connection with the incident. Six people are yet to be arrested,” the officer added.

In April, Hindu and Muslim groups clashed with each during a Hanuman Jayanti procession in Jahangirpuri, in which eight police personnel and a local resident were injured.