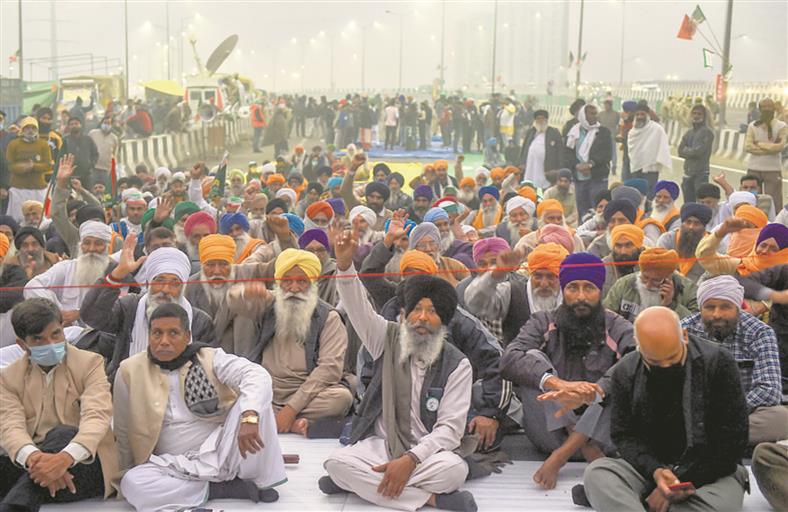 ‘Jai Jawan Jai Kishan’ is not a mere slogan once given by former prime minister Lal Bahadur Shashtri, as a cross-section of protesting farmers say they have made it a point of faith and practice in life.

Elaborate security arrangements have been made by Delhi Police and Uttar Pradesh Police at the Ghazipur border here ahead of the tractor rally, which will kickstart on Tuesday, with the deployment of a large contingent of forces.

People, who have come from different parts of Western UP and Uttarakhand in their tractors, to take part in the rally, claim that the security forces around them are no different as “they are also farmers but in uniform”.

Seventy-five-year-old protester Chaudhary Narendra Singh of Titawi village of Muzaffarnagar was heard advising his younger companions that they should not do or say anything against the men in uniform deployed as part of  the security arrangement. “My own son is in the Army. We are the farmers and we have given our sons for the security of the country. These policemen are there for our safety and so we should not only cooperate with them but share their responsibility of making the rally a grand success,” he said.

When asked as to why he had been participating in the protest and what is the problem in the farm laws enacted by Parliament, Ankit Tomar, a young protester from Bijnore, said, “The laws are not good for us, not good for the farming community.” But when asked how, he said, “I don’t know the details. But seniors in our village said, it is not good, we believe it. Why will they mislead us?”

Suraj Chaudhary from Muzaffarnagar, who is an Army jawan and has taken leave to participate in the protest rally, however, said, “The laws in their entirety are bad for farmers. It is not about the provisions of the laws, rather their souls are anti-farmer. We can’t accept them and till they are repealed we will continue with our protest.”

Karamveer Bharti of Bulandshahr, another protester, said people in the cities are not able to grasp the dangers these laws will bring. “Prices of food items will increase manifold even without adequately compensating the farmers. Corporates will enter villages and first they will exploit farmers with their huge capital and then consumers will be fleeced of their money,” he said.