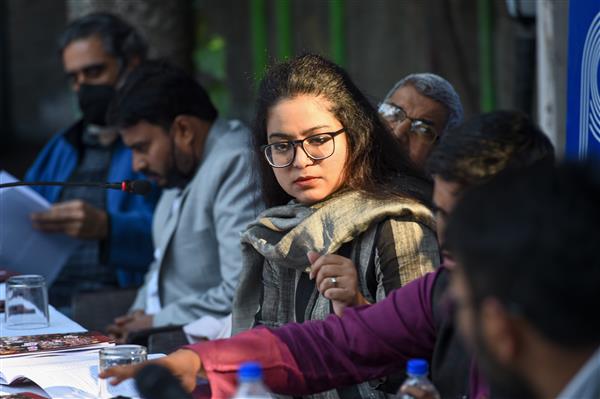 Jamia Millia Islamia has banned the entry of its three former students, including the 2020 riots accused Safoora Zargar, on its campus for “agitating” in the university over an “irrelevant and objectionable” issue.

Signed by the chief proctor, the orders dated September 14 said the competent authority has approved a campus ban on ex-students for maintaining a peaceful academic environment.

An activist and scholar, Zargar made headlines due to her alleged involvement in the anti-CAA protests after the Citizenship Amendment Act was passed by the Parliament in December 2019.

Besides Zargar, the orders have been issued against two more ex-students of Jamia Millia Islamia, it said.

While the language in the orders against the two former students is similar, the notification against Zargar mentions her involvement in organising agitations, protests and marches on the campus “against the irrelevant and objectionable issues to disturb the peaceful academic environment”.

“She is instigating innocent students of the University and trying to use the University platform for her malafide political agenda along with some other students,” the order read.

It further said that Safoora is hampering the normal functioning of the institution.

The order has come days after the university cancelled the admission of scholar Zargar due to “unsatisfactory” progress in her thesis work.

Zargar has refused to comment on the campus ban.

She along with several other students has been staging protests against the cancellation of her admission.

“Safoora Zargar is an ex-student of M. Phil, Dept. of Sociology, Faculty of Social Sciences. She is one of the accused of conspiracy with other persons to instigate and start riots in northeast Delhi on 23.02.2020. She was booked under Unlawful Activities Prevention Act (UAPA), 1967 by Delhi Police...” the order stated.

“Her name was removed from M. Phil because of non-submission of M. Phil dissertation within the given period despite giving several chances and she is not a student of Jamia Millia Islamia,” it added.

The notices issued against two former students stated that they were at the forefront of the unauthorised gatherings of students on the campus several times including one which took place in the University’s Central Canteen on August 30. They have been found involved in organising agitations, protests and marches on the campus despite not being JMI’s students, the university added.