Kejriwal ‘heckled’ with chants of ‘Modi, Modi’ at Vadodara airport, says BJP and Cong united to ‘abuse’ him : The Tribune India

Kejriwal ‘heckled’ with chants of ‘Modi, Modi’ at Vadodara airport, says BJP and Cong united to ‘abuse’ him 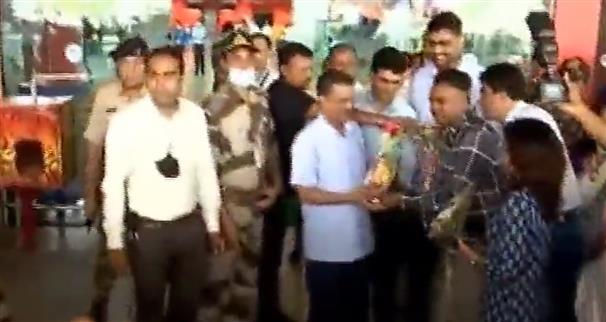 Aam Aadmi Party (AAP) national convener Arvind Kejriwal on Tuesday claimed he was heckled at the Vadodara airport in Gujarat by a group of people who raised slogans hailing Prime Minister Narendra Modi.

Kejriwal also claimed supporters of Bharatiya Janata Party (BJP) never raise slogans against Congress leader Rahul Gandhi when he visits Gujarat and alleged that BJP and Congress are "united" to abuse him and AAP.

"When I landed at the airport in Vadodara, some 30-40 people shouted, 'Modi', 'Modi', 'Modi' in front of me. The situation in Gujarat is such that BJP is going to be in great trouble," the Delhi Chief Minister told reporters.

Kejriwal is in Vadodara to address a town hall meeting as part of the campaign to reach out to various sections of society ahead of the elections, due in December this year.

"It is said that there are 66 seats in urban areas (in Gujarat) which BJP never lost. But this time, they will be in trouble. They are not going to win all these seats (in upcoming Assembly elections)," Kejriwal said.

He alleged BJP and Congress were abusing him because he talks about the well-being of the people of Gujarat.

In the coming days, Congress and BJP will field national-level leaders in Gujarat "who will abuse me", the AAP leader said.

During his multiple visits to the state, he had promised a string of "guarantees" including free power and the generation of jobs. He also assured the welfare of various sections, including women, youth, lawyers, auto-rickshaw drivers, government employees etc.