Lawyers for anti-farmer cases: Kejriwal faces off with LG 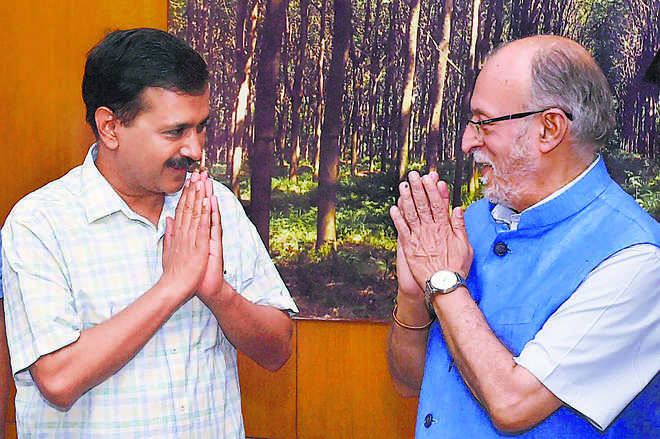 Delhi’s Lieutenant Governor Anil Baijal on Saturday overturned a decision of the state cabinet to appoint a set of prosecutors to argue the anti-farmer agitation cases lodged by Delhi Police in relation to the Republic Day violence in the capital, setting the stage for another confrontation with chief minister Arvind Kejriwal.

The LG, citing his powers under the Constitution, cleared a panel of 11 advocates suggested by Delhi Police instead.

Taking to Twitter, Delhi Chief Minister Arvind Kejriwal said the reversal of the decisions of the cabinet was an insult to the people of Delhi.

“Overturning cabinet decisions like this is an affront to the people of Delhi. The people here gave a resounding mandate to the Aam Aadmi Party and defeated the BJP. The BJP can run the country. It should let AAP run Delhi. Interference in every small thing related to Delhi is an insult to its people. The BJP should honour democracy and the will of the people,” said Kejriwal.

Earlier on Saturday Delhi Deputy Chief Minister Manish Sisodia asked what the need for an elected government was if "everything had to be done through the Centre via LG".

Sisodia questioned the panel of 11 lawyers (prosecutors for anti-farmer cases) proposed by Delhi Police and approved by LG Baijal, rejecting the choice of lawyers the Delhi cabinet had cleared on July 19.

The Delhi cabinet had decided that the lawyers approved by it would fight the cases related to violence and damages during the Republic Day tractor rally by farmers in the capital.

Sisodia quoting LG’s orders said, “In exercise of the powers conferred in provisions of Article 239A of the Constitution, I (LG) hereby direct that 11 law officers, advocates as suggested by the Delhi police be appointed.”

He asked if the Centre was worried that the lawyers appointed by Chief Minister Arvind Kejriwal would “expose the conspiracy of the Centre against the farmers in court”.