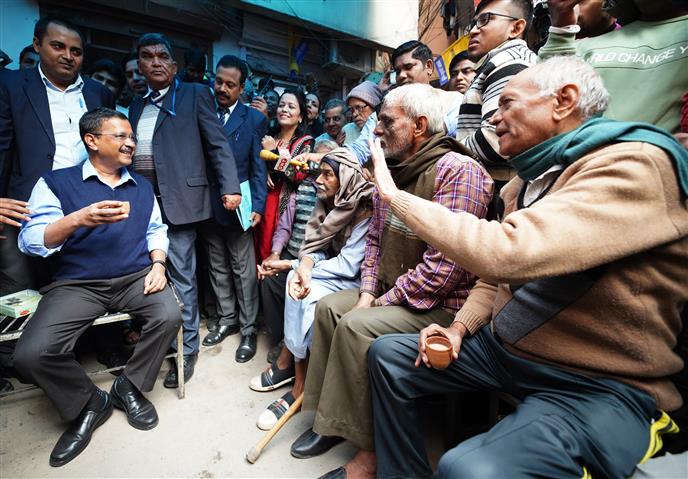 Delhi Chief Minister Arvind Kejriwal, while addressing the media on Tuesday, announced that if the Aam Aadmi Party (AAP) came to power in the Municipal Corporation of Delhi (MCD), the residents welfare associations (RWAs) would be provided more political and financial powers under the scheme “Janata Chaleygi MCD”.

AAP convener Arvind Kejriwal on Tuesday canvassed for the party candidates for the upcoming MCD poll. He interacted with people during a door-to-door campaign and sought their cooperation to transform Delhi into a clean and beautiful city. “It pains my heart to see Delhi engulfed in garbage. Despite being the CM, I have no power to clear the waste because it is under MCD's domain,” he told the people. TNS

“We want to make every resident of the city ‘Chief Minister’,” Kejriwal said.

Elaborating on the scheme, he said the RWAs would be allocated funds to run their offices and they would be given the status of “mini councillors”.

Complete transparency would be maintained since the complaints would be registered online. People could also follow the status of the complaint, the Delhi CM said.

Urging the RWAs to campaign for AAP nominees in the elections, which will be held on December 4, he said the party was headed for a huge victory and would win at least 230 out of 250 wards of the MCD.

Referring to the BJP campaign for the MCD election, he said the saffron party had pressed seven sitting Chief Ministers, a deputy Chief Minister and 17 Cabinet Ministers for campaigning.

Challenging BJP president JP Nadda to list one development project undertaken by his party in Delhi, Kejriwal said its only contributions was the creation of “hills of garbage”.

He alleged that Lieutenant Governor of Delhi was being used to create bottlenecks in government’s works.