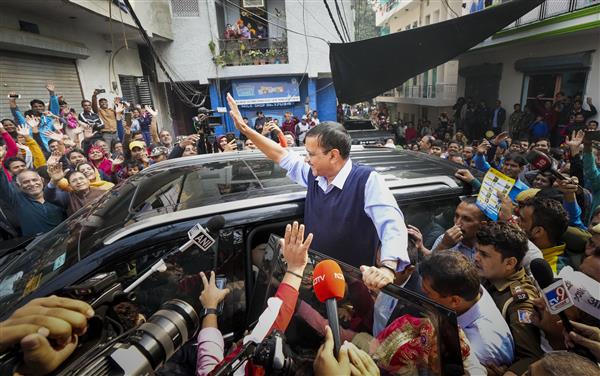 The mood at the Aam Aadmi Party office here was celebratory Wednesday morning with patriotic songs blaring through loudspeakers and the entire premises decked up with colourful balloons as the latest counting trends showed the party just inching ahead of the BJP in the MCD polls.

A large stage has been set up for mediapersons at the Rouse Avenue office of the party.

AAP workers, nervous but hopeful, had their eyes glued to LED screens throwing the latest counting trends. They are also keeping a tab on social media and some of them were seen constantly tweeting as the final touches were being given to the office for celebrating what could be the party's first victory in municipal polls here.

"AAP hi aayegi MCD mein is baar humko bharosa hai (We are confident the AAP will win this MCD poll)," said a party worker blowing blue and yellow balloons at the office.

Delhi Chief Minister Arvind Kejriwal is expected to address people after the results.

In the early trends, the BJP was leading in 66 seats and the Aam Aadmi Party in 30 around 9 am. The Congress was ahead on just three seats.

The margin between the AAP and the BJP narrowed as the counting progressed, and around 09.05 am the BJP was leading in 107 seats and the Aam Aadmi Party in 95.

Most exit polls have predicted a huge win for the AAP over the BJP with the Congress being a distant third.

While the AAP had fielded 138 women candidates, the BJP and the Congress had nominated 136 and 129, respectively.

The high-stakes election to the 250 wards of the Municipal Corporation of Delhi (MCD) was held on December 4, sealing the electoral fate of 1,349 candidates in voting machines. A voter turnout of 50.48 per cent was registered in the elections.

In the 2017 civic election, the BJP had won 181 of the 270 wards. Polling could not be held on two seats due to the death of candidates. The AAP had won 48 wards and the Congress 27. The voting percentage that year was around 53.

The high-stakes election to the 250 wards of the Municipal Corporation of Delhi (MCD) was held on December 4, sealing the electoral fate of 1,349 candidates in voting machines. A voter turnout of 50.48 per cent was registered in the elections.