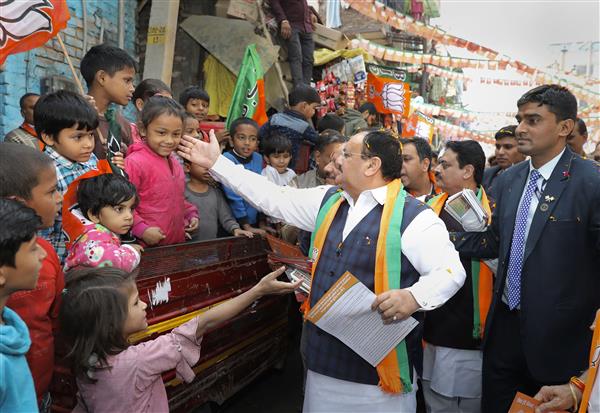 Senior BJP leaders, including Union ministers, carried out door-to-door campaigns here on Sunday ahead of the municipal polls, with party chief JP Nadda saying the AAP has deprived Delhi of development while the country is marching ahead.

The December 4 Municipal Corporation of Delhi (MCD) polls are being seen as a high stakes contest with the Aam Aadmi Party (AAP) and the Congress eyeing to wrest the civic body from the BJP which ruled it for 15 years.

Seeking support for BJP candidates in a door-to-door campaign in the Wazirpur area, Nadda assailed the AAP government alleging it deprived Delhi of development while the entire country is marching ahead under the leadership of Prime Minister Narendra Modi.

The party is going to win 180 of the 250 wards in the elections to the MCD, Delhi BJP president Adesh Gupta claimed while campaigning in the Baljeet Nagar ward.

“People have come to realise that (Chief Minister and AAP national convener) Arvind Kejriwal says something and does exactly the opposite. AAP leaders know through their internal surveys that they are badly losing the polls,” he said.

The Delhi BJP also took around 10,000 slum dwellers from 50 assembly constituencies for a visit of 3,024 flats recently provided to people from economically weaker sections under the ‘Jahan Jhuggi Wahan Makan’ scheme at Kalkaji.

The BJP is determined to provide ‘pucca’ houses to all slum dwellers of Delhi by 2027, the party’s national secretary Sunil Deodhar said.

Union Minister Piyush Goyal campaigned in the Gandhi Nagar and the Shastri Nagar areas of East Delhi. The “biggest evidence” of the Kejriwal government’s “corruption” was withdrawing its excuse policy-2021, he said.

The excise policy 2021-22 was withdrawn by the AAP government in July after Delhi Lieutenant Governor VK Saxena recommended a CBI probe into alleged violation of rules in its implementation on November 17 last year.

“The AAP government in Delhi has proved to be a complete failure when it comes to discharging responsibilities, and that is the reason why the BJP is getting the love and support of the people of the city,” he said.

“Together, Kejriwal and his ministers have crossed the pinnacle of corruption and tarnished the image of India not only in the country but also abroad,” Goyal alleged.

In the Kalkaji area, Union Minister Hardeep Singh Puri said Kejriwal talks about making everything free, but when it comes to funds for it, he becomes dependent on the central government.

“People of Delhi have been cheated for the last eight years in the name of politics of freebies followed by Kejriwal and his party,” Puri said.

Uttarakhand Chief Minister Pushkar Singh Dhami claimed the “immense support” being received from the public is a “direct proof” that the people of Delhi are going to make the BJP victorious in the MCD polls.

Over one lakh BJP workers led by Nadda reached out to voters across the 250 municipal wards during the campaign, said a statement issued by the Delhi BJP.