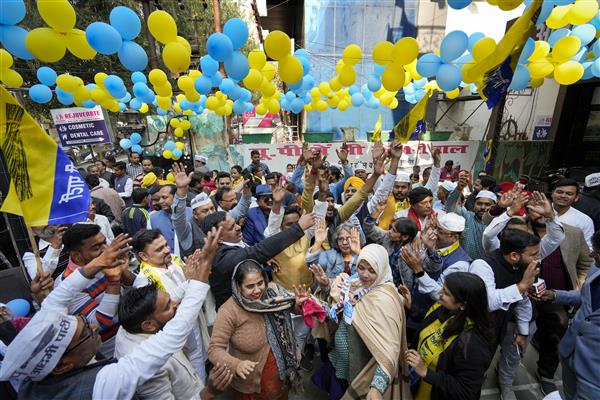 Aam Aadmi Party workers celebrate their victory in Delhi MCD elections, at the party office, in Lucknow, on December 7, 2022. PTI

Most candidates hailing from political families emerged victorious in the Delhi civic polls, while the richest contender faced a drubbing.

The only transgender candidate in the fray, Bobi of the AAP, defeated Varuna Dhaka of the Congress by 6,714 votes in Sultanpuri A. Dhaka is daughter-in-law of former Sultanpur Majra MLA Jaikishan.

Shalini Singh, a former Mrs India who also served in the Indian Army, lost to BJP’s Ram Niwas in Dwarka A by 1,755 votes.

The BJP’s Ram Dev Sharma, the richest candidate to have contested the MCD polls, lost to AAP’s Mohd Sadiq by 11,626 votes in Ballimaran.

In Shastri Nagar, Manoj Kumar Jindal of the BJP got the better of AAP’s Babita, one of the richest candidates, by 12,209 votes.

Nandani Sharmi, who had declared assets worth over Rs 49 crore, lost to AAP’s Leena Kumar in Malviya Nagar ward by 3,630 votes.