This extension of the over 4.2-km Grey Line (Dwarka-Najafgarh corridor) will immensely benefit the residents of the interior areas around Najafgarh 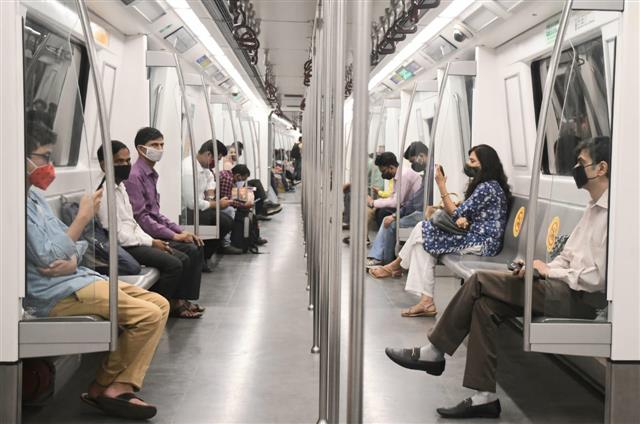 An upcoming station on the Delhi Metro's Grey Line will reflect the heritage, culture and biodiversity of the Najafgarh region through artwork panels on its walls, officials said on Sunday.

The Dhansa Bus Stand metro station, built on the extension of the Grey Line, is expected to get operationalised by July end.

The 1.8-km long Najafgarh–Dhansa Bus Stand corridor is now ready for operations after receiving the mandatory approval from the Commissioner of Metro Rail Safety (CMRS). The exact date for opening of the corridor shall be intimated shortly, they said.

This extension of the over 4.2-km Grey Line (Dwarka-Najafgarh corridor) will immensely benefit the residents of the interior areas around Najafgarh.

The upcoming station on the Dwarka–Dhansa Bus Stand corridor has been adorned with attractive artworks and photographs, which display the rich heritage, culture, flora and fauna of this suburban locality of the national capital.

"The Najafgarh–Dhansa region of south west Delhi has deep cultural roots. It is rich in history and is also home to a marshy ecosystem which encourages the visit of migratory birds and flourishing of local wildlife.The artworks and photographic displays have tried to capture these unique characteristics of this area," a senior official said.

'Jheel', a waterbody located between Najafgarh and Dhansa is an ecological paradise for a large number of perennial local wildlife and migratory birds. Parrots, eagles, ducks, sparrows, kingfishers dot this area and are a delight for bird watchers in the winters.

Photographs on printed glass panels at the station showcase the rich biodiversity of this area and is themed as 'Migratory Birds', the DMRC said in a statement.

Agriculture and animal husbandry are the main sources of income for the locals, but real estate projects and event venues contribute significantly to the economic progression, officials said.

"The colour palette of the station has been kept earthy and bold to show the amalgamation of rural and the urban values. A hand-painted artwork shows the residents coming together to honour the essence of their values and is themed as, 'Fringes of rural-urban progression'. The artwork showcases the bridge that is built in order to connect the past and the future," the statement said.

The surrounding villages in this area are renowned for their folklore. The villages host fairs to celebrate their historical significance.

"The locals gather around the ancient temples to pray and connect together as a community. The myths and the fables have given this area an unique identity. Therefore, some hand-painted artworks are inspired by this rich spirit and the celebration of local values and are themed as 'local socio-cultural scenario'," the official said.

Few artworks depict scenes from the fairs, while some showcase the spirit of celebration with a touch of local designs and motifs, he added.

The artworks will be eye-catching for passenger passing through the station and might generate interest in the place itself. The art works are aesthetically executed to enhance the experience of commuters, the DMRC said.

The art works have been curated by the DMRC's architecture department and have been provided by a number of young artists and photographers, it said.

The decoration of the station has been done in line with DMRC's efforts to utilize its premises as a platform to showcase the rich heritage and culture of the nation. A number of other stations on the DMRC network have also been decorated with art works and panels.

With the opening of this Grey Line extension, the Delhi Metro network will now span 390 km with 286 metro stations, the DMRC said. — PTI