More than 100 shops reduced to ashes at Chandni Chowk : The Tribune India 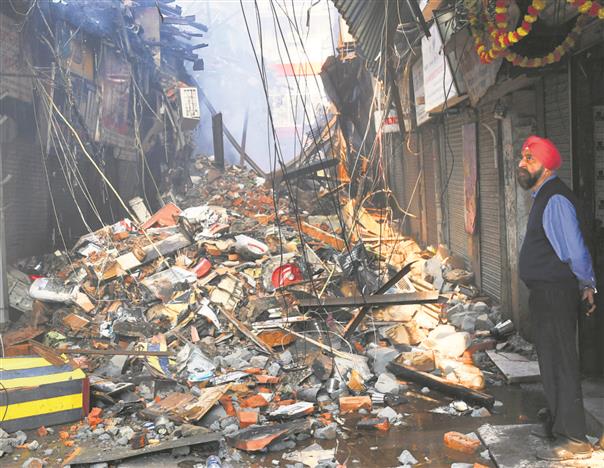 Around 100 shops were gutted in a massive fire in the wholesale market of Bhagirath Palace area in Chandni Chowk here, police said on Friday.

No injuries have been reported so far, they said.

Five major buildings got affected during the fire-fighting operations out of which three collapsed, they said.

According to the fire department, a call about the blaze was received at 9.19 pm on Thursday and 40 fire tenders were rushed to the spot.

At present, 22 fire tenders are engaged in the cooling process as the fire has been brought under control after more than 12 hours, a fire department official said.

The fire broke out in a shop in Mahalaxmi Market and soon spread to adjacent ones, all dealing in electrical appliances, officials said.

White smoke billowed high in the sky as the toxic stench of burning plastic and rubber polluted the air.

Director of Delhi Fire Service Atul Garg said, “Fire is under control. Now, 22 fire tenders are working on cooling operations. The cause of the fire is not yet known.” Deputy Commissioner of Police (North) Sagar Singh Kalsi said as soon as information about the fire was received, the fire department, NDRF, MCD, reserve force from police rushed to the spot.

Senior officials also reached the site of the incident, he said.

“Every effort was put in to douse the fire. There is no casualty at present. Five major buildings were affected and these housed around 100 shops which got incinerated. Of the five affected buildings, three have collapsed,” he added.

Meanwhile, Delhi Chief Minister Arvind Kejriwal expressed grief over the incident and said he is taking stock of the situation from the district administration concerned.