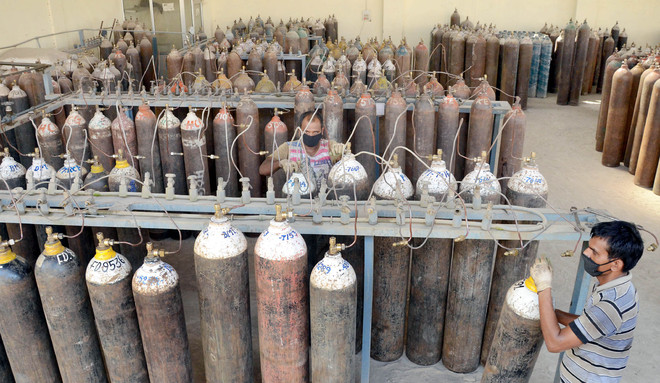 The Delhi High Court Wednesday said there is no clarity on the steps taken by the Centre for setting up a buffer stock of liquid medical oxygen (LMO) in the national capital to deal with the Covid-19 pandemic even as the third wave is anticipated.

A bench of Justices Vipin Sanghi and Jasmeet Singh said the status report filed by the Centre does not indicate that buffer stock of LMO is actually created for the use of Delhi and it only talks of enhancement of oxygen storage capacity here.

“Today the situation may look fine but then everyone saw what happened in April-May. There is no escape from this (buffer stock of LMO). This is like insurance,” the bench said, adding that it has been flagging this issue ever since the Supreme Court passed an order in April.

The Supreme Court had passed an order on April 30 directing the Centre and Delhi government to create appropriate buffer stock of LMO in the national capital and the direction is an obligation cast on both the governments, the bench said.

“Creation of buffer stock cannot happen in a week or two. You will need to first install necessary infrastructure for that,” it added.

The high court was hearing various issues related to Covid-19 crisis and the next hearing is scheduled for August 23.

The bench said if the central government is of the view that it is not required to take any steps on LMO or that sufficient buffer stocks are available in Delhi or if the responsibility shall fall on the Delhi government, it shall approach the Supreme Court whose order is enforceable and the government is bound to comply with it.

During the hearing, central government standing counsel Kirtiman Singh said the Delhi government has done enough for creating a buffer stock and the state counsel could elaborate it.

Amicus Curaie and senior advocate Raj Shekhar Rao submitted that it was not clear whether buffer stock of LMO exist in Delhi and to what extent.

Senior advocate Rahul Mehra, representing the Delhi government, said they have a buffer stock of around 420 metric tonnes of LMO kept at different places with the suppliers outside Delhi and by August 31, they will transfer this stock to Delhi.

The court was also informed by the Centre that manufacturing capacity of Liposomal Amphotericin B, used for treating patients of black fungus which primarily affects those who have recovered from Covid-19 and was in shortage earlier, has been augmented.

The Centre’s counsel said the centralised allocation of the medicine to the states has been discontinued and now they will have to procure the drug directly from the manufacturers.

The issue of shortage of medicines for treating black fungus was raised by advocate Rakesh Malhotra.

According to the Union Health Ministry, mucormycosis or black fungus is a complication caused by a fungal infection. People catch mucormycosis by coming in contact with the fungal spores in the environment. It can also develop on the skin after the fungus enters the skin through a cut, scrape, burn, or any other type of skin trauma.

The disease is being detected among patients who are recovering or have recovered from Covid-19. Moreover, anyone who is diabetic and whose immune system is not functioning well needs to be on the guard against this, the ministry has said. — PTI