One dead in east Delhi market blaze : The Tribune India

35 fire tenders and 150 fire fighters controlled the blaze which broke out around 5.40 pm on Wednesday 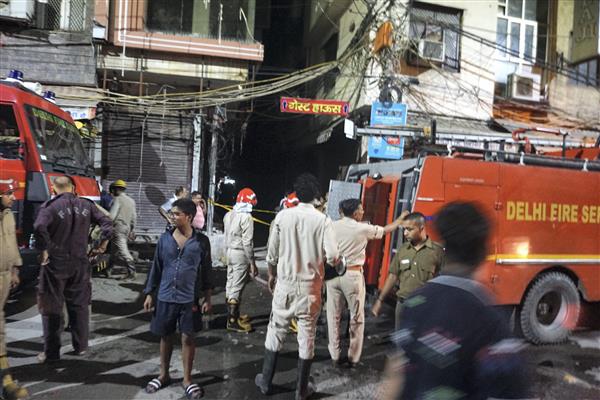 Fire fighters douse a fire which broke out at Gandhi Nagar cloth market, in New Delhi on October 5, 2022. PTI

The charred body of a 19-year-old man was recovered on Thursday morning from the second floor of a shop in east Delhi’s Gandhi Market where a major fire broke out a day ago, police said.

The deceased has been identified as Shehnawaj, according to the family members. However, since the body is charred completely, DNA profiling would also be conducted to ascertain the identity of the victim, they said.

It took nearly 10 hours for the fire fighters to douse the flames, fire officials said, adding a short-circuit might have caused the fire.

Around 35 fire tenders and 150 fire fighters controlled the blaze which broke out around 5.40 pm on Wednesday, the officials said, adding the fire extinguished at 3.30 am.

Deputy Commissioner of Police (Shahdara) R Sathiyasundaram said a charred body was found on the second floor of the building on Thursday morning following the fire broke that broke out in Jai Ambe garments shop. The fire quickly spread to other nearby shops due to storage of synthetic cloths.

All senior officers were on the spot including police personnel of Gandhi Nagar sub-divison and DCP Reserve.Civil defence personnel were also deployed to bring the fire under control, he said.

According to police, one of the workers identified as Aftab (32), stated that he has been working at the Jai Ambe garments shop for the last 12 years. After closing the shop on Wednesday at about 5- 5.15 pm, he along with four other workers went near main road. After five-seven minutes, they came back towards Janta lane which is another entry towards the shop, when they saw smoke emitting from their shop.

He immediately called his owner and went near the shutter and realised that his brother Shehnawaj was trapped inside and also heard the voice of him knocking the door.

“They attempted to break the locks and told his brother to go upstairs. However, by the time they broke the lock, the fire had spread and his brother was not traceable,” the senior police officer said.

On Thursday morning, the fire service team found a charred body on the second floor of the building having total four floors with an area of 400 square yards, he added.

The fire officials said the cooling operations are underway. The fire started in a shop in the Nehru lane where mainly garments and hosiery outlets are located and it soon spread to other adjacent shops.

“A call about the fire was received at 5.40 pm and a total of 35 fire tenders were rushed to the spot,” said Atul Garg, Director, Delhi Fire Service.

The operation was impeded by narrows lanes and the absence of a water source nearby, he said.

The fire tenders had to be parked far away from the site, he added.

Crime team and forensic team will inspect scene of incident once the heat generated is down, police said, adding short circuit is suspected to be the reason behind the fire.