Rapid-antigen tests started in the city on June 18 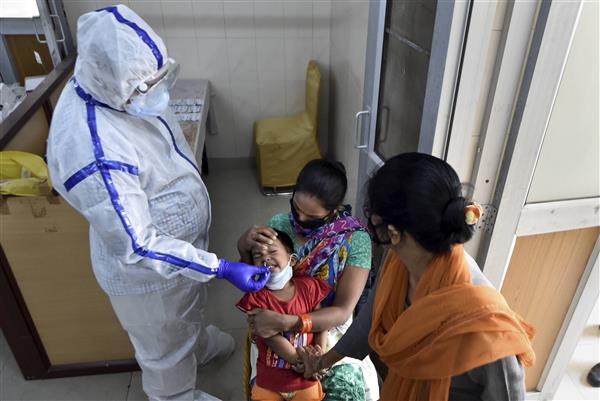 More than 45 per cent of the over 5.96 lakh COVID-19 tests in Delhi were conducted in the last 16 days after the government started testing through the rapid-antigen methodology in and around the containment zones of the national capital.

Rapid-antigen tests started in the city on June 18.

Since then, a total of 2,75,396 tests through the RT-PCR (reverse transcription-polymerase chain reaction) and rapid-antigen methods have been conducted in Delhi with around 17,000 tests per day.

Of this, around 1.5 lakh people have been tested through rapid-antigen kits, according to the Delhi government’s health bulletins.

So far, 5,96,698 tests have been conducted through RT-PCR and rapid-antigen methods.

On Friday, the government expanded rapid-antigen testing, earlier limited to containment zones, to other areas in all 11 districts of the national capital.

Now, state-run and private hospitals in the capital have also begun testing for COVID-19 using this method following the nod of the government.

According to health authorities, rapid-antigen testing is an easy and cheaper method as compared to the RT-PCR test.

Each testing kit costs Rs 450 and can provide results within 30 minutes as compared to RT-PCR test that takes three to four hours.

The kits, called Standard Q COVID-19 Ag detection, have been developed by South Korean company S D Biosensor. The testing method involves looking for antibodies which are produced when the body is exposed to a pathogen.

If a person has antibodies associated with novel coronavirus, it means the person is either COVID-19 positive or has recovered.

According to the Indian Council of Medical Research (ICMR), suspected individuals who test negative for COVID-19 in the rapid-antigen test should undergo RT-PCR to rule out the infection.

While positive test results should be considered as true positive and do not need reconfirmation by RT-PCR test, it said.

Rapid-antigen testing requires a prescription and an ICMR form filled by a registered doctor, and a government identity proof, same as that for RT-PCR test. PTI