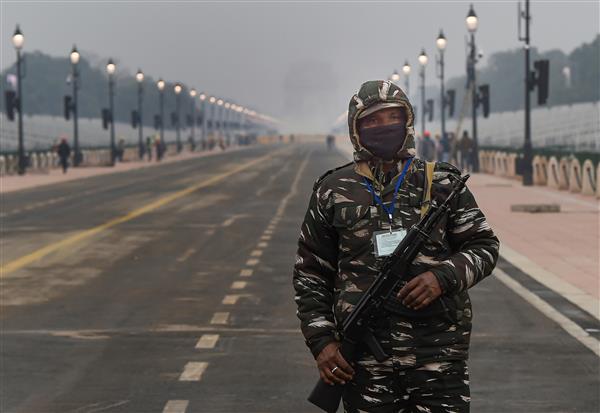 A security personnel stands guard at Rajpath on the eve of full dress rehearsal of the Republic Day parade, in New Delhi. PTI

Briefing the media about the Republic Day security arrangements, Asthana said a total of 27,723 Delhi Police personnel, including 71 DCPs, 213 ACPs and 753 inspectors have been deployed in the capital for the Republic Day parade. They are being assisted by 65 companies of CAPFs.

The police chief said over the last two months, the Delhi Police have intensified anti-terror measures in coordination with other security agencies.

“Since the last two months, we have intensified our anti-terror measures. These measures have been taken on 26 parameters very intensively. It is also because Delhi has always been a target for terrorists or anti-social elements. This year too we have been very much alert,” Asthana said.

According to a recent order, operation of sub-conventional aerial platforms, including UAVs, paragliders and hot air balloons, over the national capital has been prohibited in view of the Republic Day celebrations.

The order came into effect on January 20 and would remain in force till February 15. —