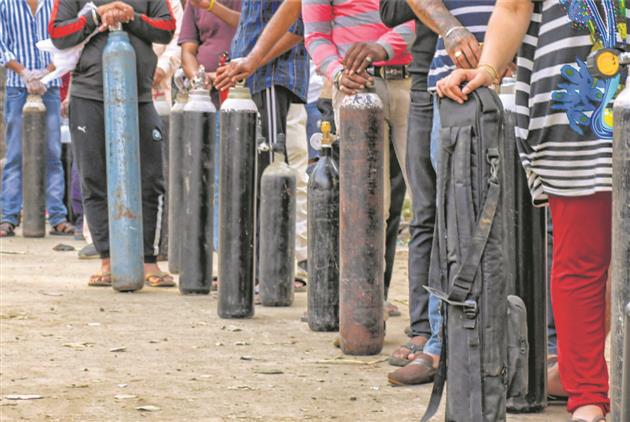 Oz to cut flights from India by 30%

Dubai: The UAE has banned travel from India for 10 days. The ban will come into effect from 11.59 pm on Saturday.

Registration for vaccination against Covid-19 for those aged above 18 will begin on CoWIN platform and Aarogya Setu from April 28, officials said. The inoculation process and documents to be submitted for the jab remain the same as before.

How can a vaccine manufactured by the same company have three prices? How can the Centre permit such brazen profiteering? — Sonia Gandhi, Congress President

Amid a worsening crisis on a day when India logged 3,14,835 cases, the highest for any country in 24 hours, the PM announced cancellation of rallies in West Bengal. He said he would conduct Covid management meetings in the Capital tomorrow, including one with oxygen producers.

Though the Centre invoked the Disaster Management Act to ensure uninterrupted transport of oxygen, hospitals continued to report how states were blocking tankers midway.

SK Saggar, CEO of Shanti Mukund Hospital, broke down while speaking about the crisis. “The situation is deplorable. Patients will die. We have no oxygen. We are asking doctors to discharge those who can be discharged. We have only two hours of supply left and are feeling helpless,” he said.

Aakash Healthcare Super Specialty Hospital at Dwarka wrote to Health Minister Harsh Vardhan that their tankers had been stopped in Faridabad and the lives of 230 patients on oxygen support were on the line.

Apollo Hospital group joint MD Sangeeta Reddy posted a tweet, urging the PM for ensuring oxygen supply. “As I tweet an oxygen tanker is at the gates of IOCL plant in Panipat. The Haryana police are stopping it. Need urgent intervention,” Reddy said.

Fortis sent an SOS to PMO and Rajasthan CM Ashok Gehlot, saying their tanker had been stopped at Bhiwadi.

Late in the evening, Sir Ganga Ram Hospital wrote to the Centre and Delhi Government, saying it had only five hours of oxygen in store.

As the crisis loomed, Deputy CM Manish Sisodia appealed to the Centre to deploy paramilitary forces with oxygen tankers to ensure smooth movement.

In NCR, many hospitals started shutting down their ICUs as oxygen supplies dried up. Metro Hospital in Preet Vihar closed its ICU, asking attendants to make arrangements elsewhere.

Noida’s Prakash Hospital and Delhi’s Shanti Mukund also began shifting patients and discharging some who they said were a little better.