Delhi Disaster Management Authority in its order on October 29 had allowed Chhath celebrations at ‘designated sites’, barring the banks of the Yamuna 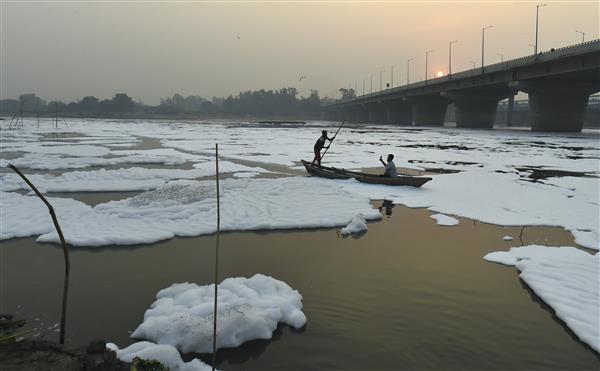 A boatman moves through a froth laden polluted Yamuna river, as smog engulfs the sky during sunset, at Kalindi Kunj in New Delhi, on Tuesday, November 9, 2021. PTI

A PIL has been filed in the Supreme Court seeking a direction to the Delhi government and the police to permit ‘Chhath puja’ on the banks of the Yamuna and that no cases be filed against devotees for performing it.

The Delhi Disaster Management Authority (DDMA) in its order on October 29 had allowed Chhath celebrations at “designated sites”, barring the banks of the Yamuna.

The four-day Chhath Puja, which began on Monday, will conclude on November 11 with the devotees offering ‘Arghya’ to the rising sun and breaking their fast.

The PIL has been filed by Sanjeev Newar, Swati Goel Sharma, who claim to be social activists, through advocate Shashank Shekhar Jha. Delhi government, DDMA, Delhi Jal Board and the Centre have been made parties.

“Issue a direction in the nature of mandamus or any other directing Respondent number 2 (DDMA) to allow ‘Chhath Puja’ at Yamuna banks with COVID protocols,” the plea said.

It has also sought a direction to Delhi Police not to lodge any FIR or arrest devotees who go to the Yamuna for the ‘Chhath puja’.

“Direct the authorities to immediately tackle the water crisis in Delhi due to the rise in Ammonia level in Yamuna,” it said.

Aam Aadmi Party and opposition BJP are engaged in bitter political debate over the DDMA’s restrictions on holding ‘Chhath puja’ at the banks of Yamuna. PTI