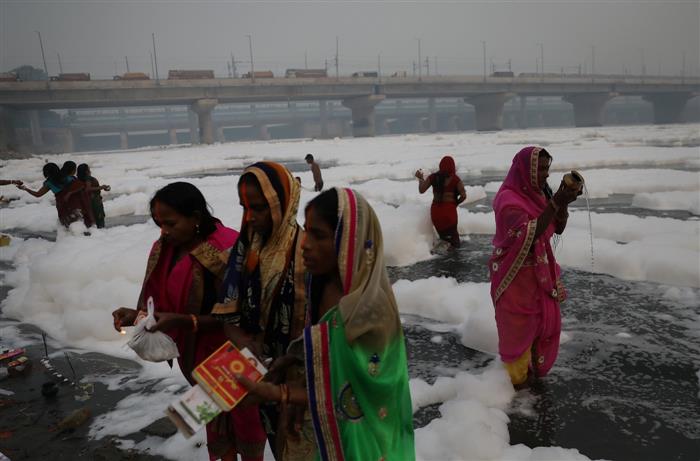 Women pray as they stand amidst the foam covering the polluted Yamuna river on a smoggy morning in New Delhi on November 8, 2021. Reuters/file

Police and administrative officials on Wednesday stopped scores of devotees thronging the ghats along the Yamuna river in Delhi for Chhath festivities, citing DDMA orders prohibiting celebrations along the river bank in view of COVID-19.

A crowd gathered at the Yamuna Ghat near Kalindi Kunj in the morning was dispersed by police and district officials, and people were re-directed towards designated spots to observe the rituals.

The Delhi Government has set up 800 makeshift ghats across Delhi for devotees to perform Chhath rituals.

The four-day-long festival of Chhath Puja is mainly celebrated by ‘Purvanchalis’ from Bihar, eastern Uttar Pradesh and Jharkhand settled in Delhi.

During the festival, worshippers follow elaborate rituals by offering ‘Arghya’ to the sun and also observe fast.

A police officer said adequate arrangements have been made at the spots designated for the rituals to manage the crowd.

Government officials said 100 teams have been deployed in South East Delhi to ensure there is no violation of Delhi Disaster Management Authority (DDMA) orders.

A senior Delhi Police officer said adequate staff from Kalindi Kunj and other police stations of the district have been deployed at the Yamuna Ghat.

“Our staff are also explaining to visiting devotees about the National Green Tribunal order, and urging them to comply with the guidelines and observe the rituals at their respective homes or within the colonies. Many of them are convinced and are returning home,” he said.

Senior district officials are also monitoring the situation, he said.

“We have also been interacting with organisers of Chhath Puja and asking them to send devotees to the designated spots where all facilities, including lighting, water, sanitation and medical care is being provided,” he said.

Paramilitary personnel have also been pressed to urge people to comply with the DDMA orders, besides keeping a watch on the law and order situation, the officials said.

The DDMA had on October 29 allowed Chhath celebrations at “designated sites”, barring the banks of river Yamuna, and directed administration and police officials to ensure strict compliance of all its Covid-related orders.

The DDMA order also pointed out that any violation of the guidelines would invite prosecution according to legal provisions, including those of the Indian Penal Code and the Disaster Management Act, 2005. PTI