Though not satisfied with what they call a meagre hike, the private ambulance association has demanded more money but called off the strike 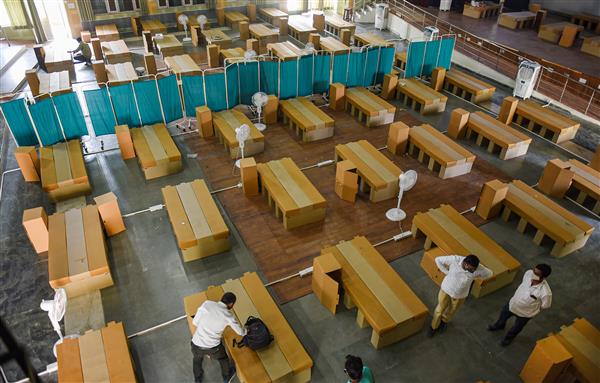 A temporary COVID-19 hospital being set up at the auditorium of a government college, in Gurugram. PTI

Following two days of strike, the private ambulance drivers called off their protest on Thursday after the Gurugram administration hiked the previously fixed operational rates.

Though not satisfied with what they call a meagre hike, the private ambulance association has demanded more money but called off the strike.

Claiming to be doing this after seeing patients’ plight, the association said the new hike is one sided and they have demanded further increase.

“We are returning to work seeking more fare to operate in the current times. However, if they don’t increase the rates, plying would be difficult,” said Vipin Kumar of private ambulance welfare association, Gurugram.

The district administration of Gurugram on Thursday issued an order to regulate the maximum amount of fare that can be charged by ambulances and other vehicles carrying patients/bodies in Gurugram.

In this regard, DC Dr Yash Garg said strict action will be taken against those who charge more than the fixed rates from the Covid patients.

“It has come to our notice that private ambulance drivers/service providers are charging exorbitantly from the citizens for transporting the patients within/outside the state. Due to this, additional financial burden is being borne by citizens during the crisis of COVID-19, which is a matter of serious concern.

“In compliance of the directions received from the Mission Director, National Health Mission (NHM), Haryana, it is necessary to fix the rate of hiring charges of ambulance to be used by citizens for transporting the patients in district Gurugram,” read the order.

According to the administration officials, the fare charges have been fixed to ease the problems faced by the Covid patients and their families due to unreasonable rates charged by ambulance drivers/owners during these precarious times.

Meanwhile, the private ambulance welfare association has demanded Rs 3,500 up to 15 km and Rs 16 per km will be charged extra for small ambulance.