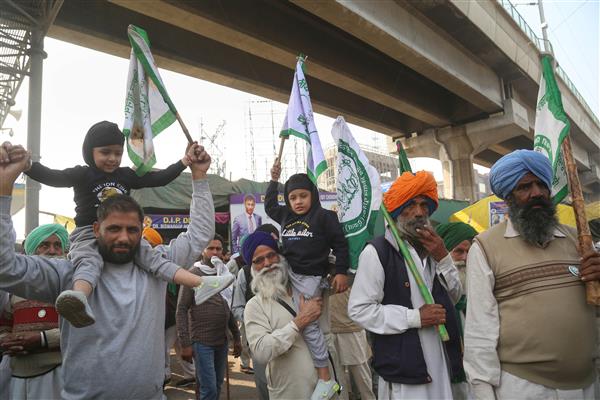 Around 70 protesting farmers, including Nihangs, who were going to Bangla Sahib Gurdwara on Thursday to pay their respects were stopped midway by police personnel, but were later taken to the shrine in buses arranged by police.

The group included women and children who had been camping at the Singhu border since November last year.

The protesters decided to visit Bangla Sahib Gurdwara in Delhi to pay their respects before returning to their homes, according to the police.

As they moved towards Delhi in their vehicles, they were stopped at Mukarba Chowk but were ultimately granted permission and taken to Bangla Sahib Gurdwara here in buses arranged by the police.

The police said after getting permission from higher authorities at the Police Headquarters, it was decided to facilitate the transportation of protesters and Nihangs as it was a goodwill gesture to pay their respects and had no political agenda.

Deputy Commissioner of Police (Outer North) Bijendra Kumar Yadav said the protesters decided at the last minute to go to Bangla Sahib Gurdwara to pay their respects and pray for the successful conclusion of the protest in the form of the government conceding to their three main demands.

“Since we cannot allow them to go further from Mukarba Chowk, it was decided that they had to take permission and as permission was granted, we decided to move them in government buses in a systematic way,” Yadav said.

“They were sent in the two buses arranged by us and taken to Bangla Sahib Gurudwara where they paid their respects,” the officer said.

The Samyukt Kisan Morcha, an umbrella body of over 40 farm unions, has been spearheading the farmers’ movement against the three farm laws and their other demands, including a legal guarantee for MSP.

Last month, a bill to repeal the three contentious agricultural laws, against which farmers have been protesting for over a year, was passed within minutes of its introduction by the Lok Sabha without discussion. PTI