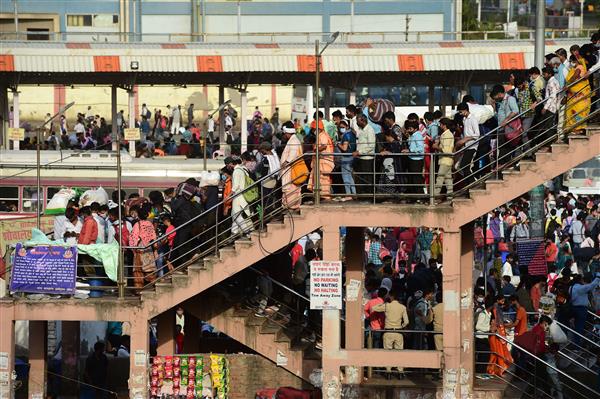 Passengers at Anand Vihar Terminal after Delhi government announced complete lockdown for 6 days due to surge in coronavirus cases, in New Delhi. PTI

The Railways on Monday said it has stopped with immediate effect the sale of platform tickets at all major stations in the national capital in view of the surge in COVID-19 cases.

The Northern Railways’ announcement came hours after Delhi Chief Minister Arvind Kejriwal announced a six-day lockdown—from 10 pm on Monday till 5 am on April 26 -- which he said was necessary to deal with the rising number of COVID-19 cases as the city’s health system was stretched to its limits.

“Due to surge in COVID’19 cases, Delhi Division of Northern Railway has decided to stop the sale of platform tickets with immediate effect till further orders to regulate the entry of passengers at platforms and station premises,” Divisional Railway Manager RN Singh said in a tweet.

The national capital’s health system is stretched to its limit with around 25,500 cases coming up every day.

The Railways said the trains already in operation would continue to run.

“Railways is there to take the last passenger to the destination. There are enough trains running and most of them at very less capacity utilization. All trains will continue to run,” Railway spokesperson DJ Narain said. PTI