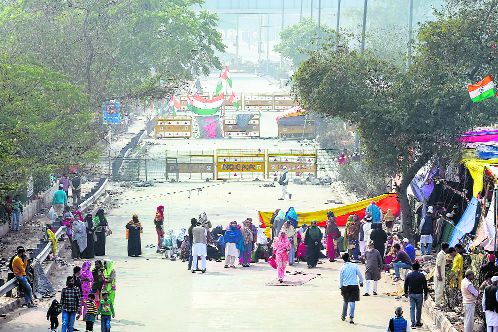 According to anti-CAA protesters, the onus lies with the Central Government to call them for talks. PTI file

A section of Shaheen Bagh protesters on Saturday said they were ready to meet Home Minister Amit Shah to raise their concerns over the new citizenship law but added that the onus was on the government to call them for talks.

However, Home Ministry officials said no request has come for an appointment with Shah to discuss issues related to anti-CAA protests.

Some protesters also said they would march to the Union Home Minister's residence on Sunday afternoon.

The protesters, mainly women, have been staging a sit-in demonstration for the past two months against the Citizenship (Amendment) Act (CAA), National Register of Citizens (NRC) and National Population Register (NPR). They said the protest was leaderless and it was up to the Home Minister to decide who all he wanted to call for talks.

An announcement in this regard was also made by a speaker from the dais at the protest venue. "We are ready to meet the Home Minister. But he should make it clear how many people he wants to meet," Syed Ahmed Taseer, one of the organisers, said.

Mehrunnisa, who has been a regular at the protest, said the protesters would march to the Home Minister's residence on Sunday.

"We would ask him to withdraw CAA-NRC-NPR," she said, adding that the protest would continue till their demand was met. In an interaction with a news channel earlier this week, Shah said anyone who wants to discuss issues related to CAA with him can seek time from his office. "(We) will give time within three days," the Home Minister added. — PTI