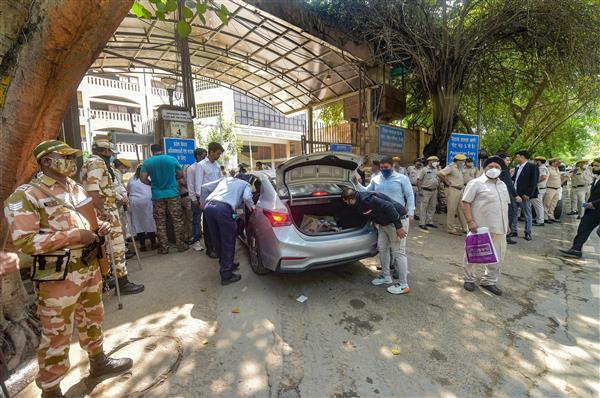 Delhi Police personnel check a vehicle at the Rohini Court, a day after the shooting incident in New Delhi on Saturday. PTI photo

Several innocent people could have lost their lives if there was no immediate police retaliation against the two armed assailants in the shootout inside the Rohini court that left three persons, including gangster Jitender Gogi, dead on Friday, Sub-Inspector Vir Singh, who was part of the security team engaged in an exchange of fire, said in his statement.

According to an FIR, Singh said that since the duo was armed with weapons and they were firing indiscriminately, it was not possible for the police team to nab them “physically”, especially when judge, court staff and advocates were inside the courtroom, and anyone could have died.

Jailed gangster Gogi and his two assailants posing as lawyers were killed inside a crowded Rohini courtroom on Friday in a dramatic shootout that also saw the police fire bullets in retaliation, officials said.

Video footage of the incident, which exposed security lapses in the system, showed policemen and lawyers rushing out in panic as gunshots rang out inside courtroom number 207.

Sub-Inspector Singh, posted with the 3rd Battalion of the Delhi Armed Police, was part of a team which had brought high-risk undertrial prisoner Gogi to the Rohini court from Tihar as he had to be produced for his case hearing on Friday afternoon.

They were also accompanied by police personnel from the Special Cell’s Counter Intelligence Unit, police said.

On Friday afternoon, Gogi was brought to courtroom number 207.

Additional Sessions Judge (ASJ) Gagandeep Singh was engaged in court proceedings and besides them, court staff and around five-six advocates were inside the room when suddenly, two men, who were dressed as lawyers and were seated, stood up and whipped out their pistols.

The assailants started firing indiscriminately at Gogi and by the time police team could have “reacted”, Gogi had already sustained several bullet injuries, the FIR said.

Keeping in mind the safety and security of everyone, Singh and his commandos—Constables Shakti and Chirag—immediately opened fire at the two armed men from their respective weapons. Simultaneously, personnel from the Special Cell and the Rohini Special Staff also opened fire, it stated.

The joint commissioner of police (northern range) has been asked to enquire into the incident and submit a report while the case is being handled by the Crime Branch. — PTI