During the programme, around 10,000 people reportedly took vows to convert to Buddhism 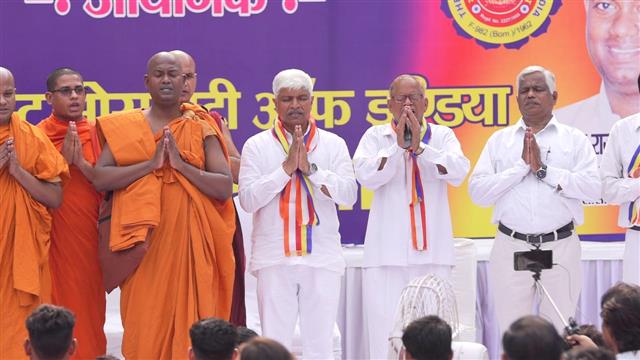 A political row erupted on Friday after a purported video of AAP minister Rajendra Pal Gautam at a “religious conversion” event went viral in which hundreds can be heard taking an oath denouncing Hindu deities, with the BJP launching an attack on Chief Minister Arvind Kejriwal and asking him to sack his cabinet colleague.

Sources in the Aam Aadmi Party claimed that the chief minister was “extremely displeased” with Gautam.

However, an immediate response was not available either from the chief minister or the Delhi government.

Gautam is the social welfare minister in the Arvind Kejriwal government.

At a press conference, BJP national spokesperson Gaurav Bhatia accused the AAP of hurting the sentiments of Hindus and alleged that “Gautam’s comments highlight the hate” the party has for the community”.

Bhatia claimed that the minister’s alleged comments were made at the behest of Chief Minister Arvind Kejriwal.

During the programme, around 10,000 people reportedly took vows to convert to Buddhism to follow Lord Buddha’s teachings and give up worship of Hindu deities.

On October 5, Gautam himself had also tweeted the pictures of the event, saying more than 10,000 people pledged to join Buddhism and work for making India free from casteism and untouchability.

Gautam, in a programme at Central Delhi’s Karol Bagh on Dussehra, showed “disrespect” towards Hindu deities in the presence of thousands of people, Delhi BJP president Adesh Gupta charged during a press conference.

“This is not an isolated incident, it is in the character of the AAP to insult and disrespect Hindu gods and goddesses. We demand that Kejriwal should immediately expel Gautam from his cabinet,” Gupta said.

Gupta also led a party delegation to file a complaint with the police here in the matter.

“Every day news of conversions comes from AAP-ruled Punjab. Similarly, Kejriwal’s minister Rajendra Pal is now conducting a mass conversion of people in Delhi,” Verma said in a tweet.

Bhatia said the comments were made due to “vote bank” politics in light of the coming elections, he said.

“How low you will stoop for votes, Kejriwal,” he asked. Bhatia said every Hindu has faith in their gods and claimed that the minister’s comments are a blow to national integrity.

The RSS affiliate also urged the Delhi Police and Lieutenant Governor VK Saxena to take “strictest action” against Gautam, alleging that administering of oaths to people at the event attended by the minister hurt the sentiments of Hindus.

The VHP also targeted Kejriwal and demanded an apology from him, alleging that his minister’s participation in the event has exposed his “hypocrisy”.

“We do not have any problem with people embracing Buddhism at the event. Hinduism and Buddhism are not separate. But the way our gods and goddesses were openly scorned at the event is not acceptable,” VHP national spokesperson Vinod Bansal said.

The Delhi minister was openly administering such oaths to people from the dias at the event and “tearing the country’s secularism into pieces”, he charged, referring to the purported footage circulating on social media.

“With his misdemeanour, Gautam has insulted the same goddess Lakshmi and god Ganesha whom Kejriwal worships on every Diwali in a showoff. He has exposed Kejriwal’s hypocrisy,” he charged.

Kejriwal must apologize to people for being “such a hypocrite” the VHP leader said.

“People have freedom to embrace the religion of their choice but nobody has the right to spew venom against Hindu gods and goddesses organising such an event for conversion. It’s condemnable, unconstitutional and hurting to Hindu sentiments,” he said.