The farmers, mostly from Punjab and Haryana and also from Madhya Pradesh and Rajasthan, arrived in trucks and tractors 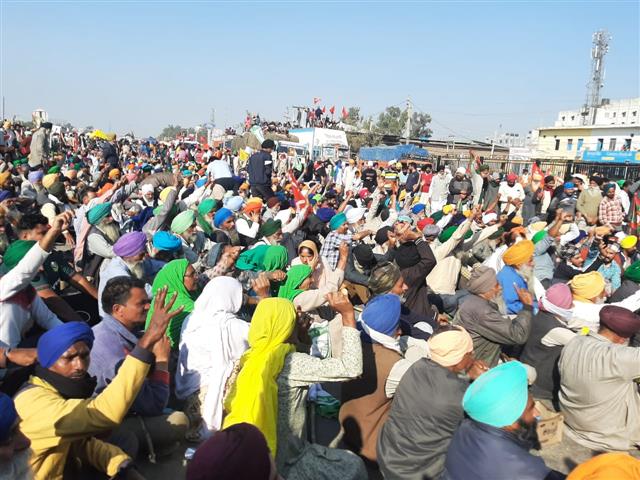 Farmers gathered at the Singhu border as part of their "Delhi Chalo" protest against Centre's new farm laws, in New Delhi on Saturday. Tribune Photo

Shouting slogans, singing songs and carrying flags in reds, greens and blues, about 400 farmers from various groups and states on Saturday gathered at north Delhi’s Burari ground where the government had allowed them to hold a peaceful protest against the new farm laws.

While thousands of farmers sat it out at various border points into Delhi for the third consecutive day, many made their way into the national capital and gathered at the Nirankari ground, one of the largest in the city.

The farmers, mostly from Punjab and Haryana and also from Madhya Pradesh and Rajasthan, arrived in trucks and tractors.

Slogans such as “Dharti Mata Ki Jai”, ‘Narendra Modi Kisan Virodhi” and “Inquilab Zindabad” could be heard from different parts of the vast, dusty ground. As some farmer leaders gave speeches, farmers danced to drumbeats and the strains of “Hum Honge Kaamyab” could also be heard.

Amid the cheerful cacophony from farmers who said they were determined to make their point, members of the Akhil Bharatiya Kisan Sangharsh Samanvay Samiti struck up a chorus of “Chahe Kuch Bhi Karlo Hum Badhte Jaenge”.

The Bangla Sahib gurdwara set up a ‘langar’ to feed the protesters. Delhi’s Aam Aadmi Party government had also made provisions for food. An e-rickshaw moved around spreading awareness about the COVID-19 pandemic and the importance of wearing masks.

“The unprecedented unity of the farmers will put pressure on the government to withdraw the three anti-farmer acts,” social activist Medha Patkar, who was at Burari with a group of men and women, told NDTV.

She said it was a decentralised movement and the protest was against the “vulgar inequity” in the country.

Farmers protesting against the Centre’s three farm laws have expressed apprehension that the laws would pave a way for the dismantling of the minimum support price system, leaving them at the “mercy” of big corporates. PTI