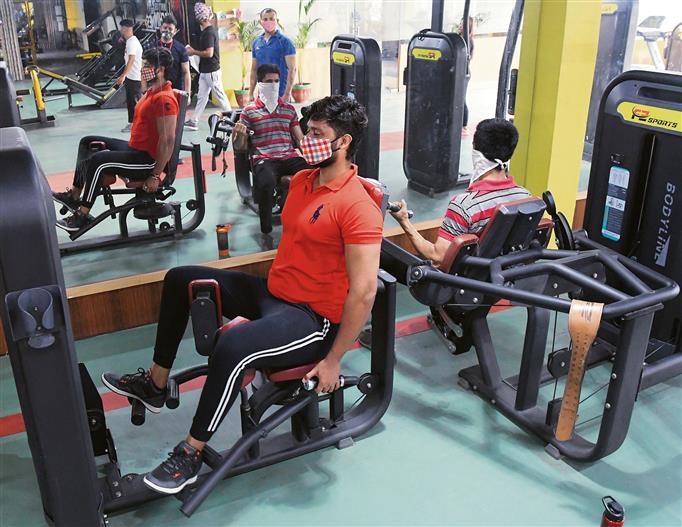 Thermal screening, entry of limited number of people, regular sanitisation of equipment—these are some of the precautions that are being followed by gyms in Delhi as they resume operations after being closed for over five months due to the novel coronavirus pandemic.

In an order issued late on Sunday night, the Delhi Disaster Management Authority said gymnasiums and yoga institutes would be permitted to reopen, except in the containment zones, with immediate effect.

Sunil Kumar Taank, president of the Indian Gym’s Welfare Federation, said 80 per cent of the facilities had opened and gym enthusiasts, who were unable to work out since March, visited in the morning.

“We are expecting more people in the evening. Since the order was issued late night, many people might not be aware,” he said.

Taank—who is the owner of Black’s Gym, which has 16 branches across the National Capital Region—said his gym would be opened after three-four days as they were sanitising the place and making preparations.

“We will have thermal check-up for customers as soon as they (customers) will enter the gym and a facility for sanitisation of shoes,” he said.

“After entering the gym, customers will have to place red tags on the machines they will use and then our housekeeping staff will place green tags on them after they are sanitised.”

Taank said his gym had an area of 2,000 square feet and only eight people would be allowed at a time, adding that they were developing an application that would be mandatory for the customers.

“Through the app, they will be able to book their slots. Each workout slot will be of 90 minutes’ duration, out of which 75 minutes will be for the workout and the remaining 15 minutes will be utilised by our staff to sanitise the equipments before the next slot,” he said.

Sarfraz Sartaj of Paradise Gym at Geeta Colony said they had started renovation in the facility and would be opening it by the end of this week.

“We have prepared a detail process that will be followed. We will only allow 10 people at a time,” the 36-year-old gym trainer said.

“Every machine will be sanitised after every single use. There will be mask, gloves, and sanitisation of shoes is also mandatory.”

“The time was very tough. Only we know how we managed to survive during the lockdown. Now, we have got hope,” Sartaj said.

Prakash Kumar, owner of Iron Champ gym at Dilshad Colony, echoed Sartaj on the situation they faced during the lockdown. He said the gym would be opened this week and all arrangements had been made.

“Only five-seven people will be allowed for an hour. Customers have been asked to carry their own water bottle, towel, mask and gloves,” Kumar said.

Parveen Yadav (41) of Champion Gym at Tri Nagar, said the machines had to be serviced again as there was rust all over and the wiring also needed to be fixed.

“Running a gym in current situation will be difficult as the number of customers has reduced and you have to increase the fee to survive and bear all the expanses,” Yadav added. PTI